The emission of free electrons from a metal surface when the light is shone on it, it is called the photoemission or the photoelectric effect. This effect led to the conclusion that light is made up of packets or quantum of energy. Now the question was whether the light quantum theory was indicative of the particle nature of light. Einstein already associated the light quantum with momentum. This strongly supported the particle nature of light and these particles were named photons. Thus, the wave-particle duality of light came into the picture. 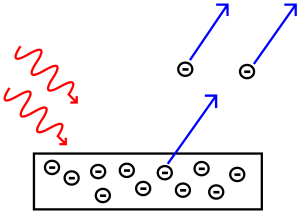 Some points to be kept in mind are:

How is light produced?

Light is made up of elementary particles called photons. Photons are tiny energy packets. When a material’s atoms get heated or excited, photons are generated from the intense motion of atoms. The hotter the body, the more photons are created.

What is the photoelectric effect?

The emission of free electrons from a metal surface when the light is incident on it is called the photoelectric effect.

What is the mass of a photon?

A photon has a zero mass, i.e. it is massless.

What is the effect of the magnetic field on photons?

A photon remains unaffected by electric and magnetic fields. It is electrically neutral.
Test your knowledge on Particle Nature Light Photons
Q5