Radioactivity is the process by which an unstable atomic nucleus loses energy by radiation. The material with unstable nuclei is considered to be radioactive. Nuclear reactions occur randomly.  Not all elements undergo nuclear decay over timescales that we can observe. Some elements take millions of years to decay.  There are three types of nuclear reactions each of which causes the nucleus to shoot out a different, fast-moving particle. The three types of radioactive decay are classified as follows:

In this article, we will be discussing beta decay in detail. But before delving deeper into the concept, let us first understand what is radioactivity.  In the next section, let us understand what causes nuclear instability.

Radioactivity was discovered by Henry Becquerel by accident. He wrapped a sample of a Uranium compound in a black paper and put it in a drawer that contained photographic plates. On examining these plates later, he found that they had already been exposed. This phenomenon was termed as Radioactive Decay.

Beta Decay is a type of radioactive decay in which a proton is transformed into a neutron or vice versa inside the nucleus of the radioactive sample. Processes like this and alpha decay allow the nucleus of the radioactive sample to get as close as possible to the optimum neutron/ proton ratio. While doing so, the nucleus emits a beta particle which can either be an electron or positron. Remember that there either a proton can turn to a neutron or neutron to a proton. Electron and the positron are generated to obey the law of conservation of charge. The beta decay occurs via the weak interaction. There are two types of beta decay, namely, beta minus (β-) and beta plus (β+). 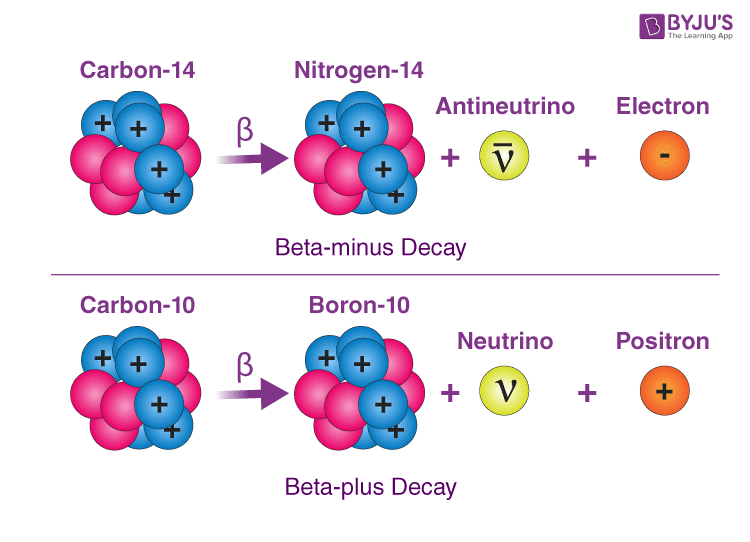 Beta plus decay can happen only if the daughter nucleus is more stable than the mother nucleus. This difference goes into the conversion of a proton into a neutron, a positron and a neutrino. There is no increase in mass number because a proton and a neutron have the same mass.

What are Beta particles?

Beta particles (β) are high energy, high-speed electrons or positrons that are ejected from the nucleus during beta-decay.

What are the health effects of beta particles?

Sufficient intensity of beta-radiation can cause burns. If beta-emitting radionuclides are inhaled or ingested, they can damage internal cells and organs.

Treatment eye and spine cancer.
Used in phosphorescent lighting typically for emergency lighting as it requires no power.
Used as thickness detectors for the quality control of thin materials such as paper.

Many beta emitters occur naturally in the radioisotopes found in the natural radioactive decay chains of uranium, thorium and actinium. Examples include lead-210, bismuth-214 and thallium-206.

What are the types of radio decay?