What is a Universal Motor?

Most of the universal motors are meant to operate at speeds as high as 3500 RPM. These motors run at a higher speed on DC supply than they run on AC supply of the same voltage. This is due to the reactance voltage drop that is present only in AC and not in DC.

How does a Universal Motor run on both AC and DC supply?

Construction of a Universal Motor

The universal motor’s rotary armature is made of straight or skewed slots on which the commutator and brushes rest. The commutation on AC is poorer than that for DC because of the current induced in the armature coils. For this reason, the brushes used have high resistance.

When fed with a DC supply

When the universal motor is fed with a DC supply, it works as a DC series motor. In this case, when the current flows in the field winding, it produces an electromagnetic field. The same current also flows in the armature conductors. When a current-carrying conductor is placed in a magnetic field, the conductor experiences a mechanical force. This mechanical force causes the rotor to rotate. Fleming’s Left-hand rule gives us the direction of this force.

When fed with an AC supply

Following are the distinctive properties of the universal motor: 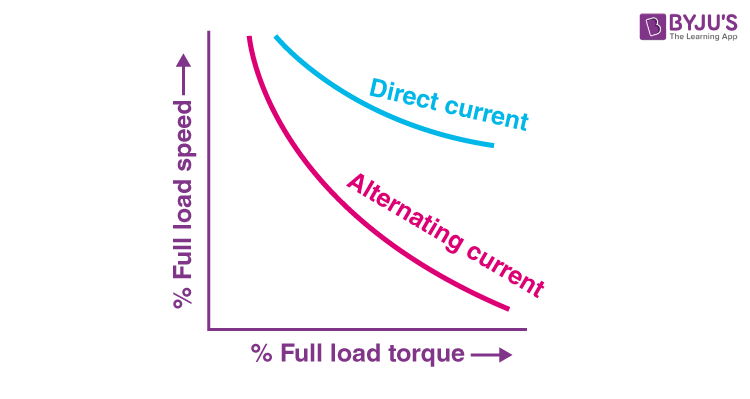 The universal motor’s speed is controlled to avoid the motor running at a dangerous speed at no load. One method to control the speed is to build the universal motor into a device to never run on no-load condition. These setup types are preferred for small applications that favour connecting the motor directly to the system that it drives.

A few other ways to set the speed of the motor to the desired value is as follows:

What is a Universal Motor, and why is it called so?

Universal Motor is a special type of motor that can run on a DC supply or a single-phase AC supply. Since it can run both on AC and DC, it is called a universal motor.

Can a Universal Motor be used as a generator?

Yes, but a universal motor is a DC series motor that does not make a good generator with general purpose characteristics.

How does a Universal Motor work?

A universal motor works as a DC series motor when fed with a DC supply. A magnetic field is produced when the current flows through the field winding. The same current also flows through the armature conductors. We know that when a current-carrying conductor is placed in an electromagnetic field, it experiences a mechanical force. Due to this mechanical force, the rotor starts to rotate.

Where is a Universal Motor used?

Due to their high starting torque and compactness, universal motors are used in portable power tools and equipment.