The energy of an electron in a single atom can be determined solely by the principal quantum number. Orbitals can be ranked in the increasing order of orbital energy as follows: 1s < 2s = 2p < 3s = 3p = 3d <4s = 4p = 4d= 4f. However, the energy of an electron in multi-electron atoms depends on both on its principal quantum number (n) and its azimuthal quantum number (l). This difference in energy of various subshells residing in the same shell is mainly attributed to the mutual repulsion among the electrons in a multi-electron atom. In multi-electron atoms, there is a repulsive force acting between various electrons apart from the attractive force between the nucleus and the electrons. Thus, the stability of an electron in a multi-electron atom is dependent on the total attractive interactions and the repulsive interactions. The electron in an atom is only stable if the total attractive interaction is more than the total repulsive interaction. For bigger atoms, due to the presence of electrons in the inner shells, the electrons in the outer shell are deprived to experience the full positive charge of the nucleus (Ze). This effect is known as the shielding of the outer shell electrons from the nucleus by the inner shell electrons. The net positive charge experienced by the outer shell electrons is termed as the effective nuclear charge (Zeffe). 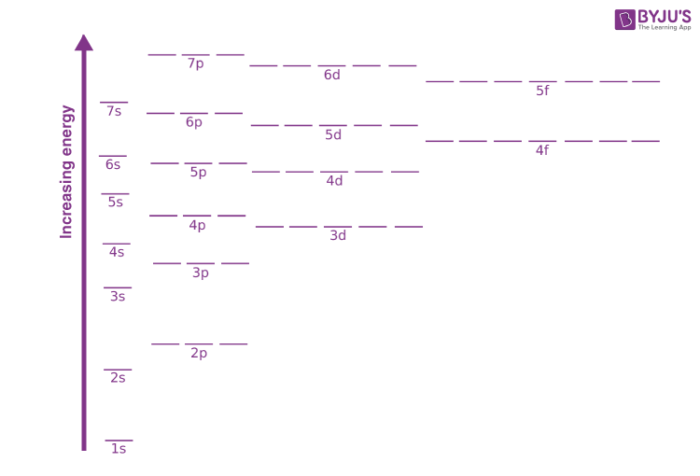 Factors affecting the energy of orbitals:

To learn more about energies of orbitals download BYJU’S – The Learning App.