The Earth is made up of numerous minute substances and particles that are involved in reactions that result in the formation of new ones. As a result, the earth is said to be a closed system because energy enters and exits the planet, with the majority of the mass remaining on the planet. This means that all elements on Earth are constantly recycling within the environment.

Consider free oxygen molecules that were floating in the atmosphere yesterday; they could be in someone’s hamburger the next day. It is up to chemists to study these cycles and keep track of their movements.

Q 1. Dinitrogen and dioxygen are the main constituents of air but these do not react with each other to form oxides of nitrogen because _______.

a) the reaction is endothermic and requires a very high temperature.

b) the reaction can be initiated only in the presence of a catalyst.

c) oxides of nitrogen are unstable.

a) the reaction is endothermic and requires a very high temperature.

Q 2. Which of the following is not a consequence of the greenhouse effect?

a) Climatic conditions will be changed

b) Plants in warmer climates with adequate rainfall would grow faster

c) The incidence of infectious diseases is likely to increase

d) Malaria will be controlled as the mosquitoes will not survive.

d) Malaria will be controlled as the mosquitoes will not survive.

Explanation: The mosquito population will grow, and malaria will spread.

Q 3. Identify the wrong statement in the following:

a) Chlorofluorocarbons are responsible for ozone layer depletion.

b) Greenhouse effect is responsible for global warming.

c) Acid rain is mostly because of oxides of nitrogen and sulphur.

d) Ozone layer does not permit infrared radiation from the sun to reach the earth.

d) Ozone layer does not permit infrared radiation from the sun to reach the earth.

Q 4. What is DDT among the following?

Explanation: DDT is a persistent organic pollutant that is easily absorbed by soils and sediments, which can serve as both sinks and long-term sources of exposure for organisms.

Q 5. Eutrophication causes a reduction in-

Explanation: Eutrophication significantly reduces the amount of dissolved oxygen in bodies of water. This occurs primarily when a body of water becomes overly enriched with nutrients as a result of excessive algae or plankton growth. It is a serious concern because eutrophication renders the body of water incapable of supporting life.

Q 6. Why is photochemical smog so named?

Photochemical smog is so named because it is formed as a result of a photochemical reaction between nitrogen oxides and hydrocarbons.

Q 7. What exactly do you mean by ‘inversion temperature’ in different parts of the atmosphere?

When we move from one region of the atmosphere to the next adjacent region, the temperature trend changes from increase to decrease or vice versa. This is referred to as inversion temperature.

Q 8. What is the most significant CO pollutant sink?

Soil microorganisms are the most significant CO pollutant sink.

Q 9. What is the aetiology of blue baby syndrome?

Q 11. Why is carbon monoxide regarded as poisonous?

Carbon monoxide binds to haemoglobin to form carboxyl-haemoglobin, which is approximately 300 times more stable than the oxygen-haemoglobin complex. When the concentration of carboxyl haemoglobin in the blood is greatly reduced, This lack of oxygen causes headaches, blurred vision, nervousness, and cardiovascular problems.

Q 12. What are the reactions involved in the depletion of the ozone layer in the atmosphere?

Q 13. Why is it that rainwater typically has a pH of around 5.6? When does it turn into acid rain?

Rainwater has a pH of 5.6 because of the formation of H+ ions from the reaction of rainwater with CO2 in the atmosphere.

It becomes acidic when the pH falls below 5.6. Acid rain is also formed as a result of the presence of sulphur and nitrogen oxides in the atmosphere.

Q 15. Green plants use carbon dioxide for photosynthesis and return oxygen to the atmosphere, even then carbon dioxide is considered to be responsible for the greenhouse effect. Explain why?

Carbon dioxide is a naturally-occurring constituent of the atmosphere that is essential for all forms of plant life. It accounts for approximately 0.033 % of the volume of the atmosphere. It contributes to keeping the earth’s temperature stable, which is necessary for living organisms.

CO2 balance in the atmosphere is maintained because CO2 is produced by respiration, the combustion of fossil fuels, and the decomposition of limestone, but it is also consumed by plants during photosynthesis.

However, human activities have disrupted this balance, and the level of CO2 in the atmosphere is rising. This has occurred as a result of deforestation, increased use of fossil fuels, and industrialization.

CO2 concentrations are estimated to have increased by about 25% over the last century. The average global temperature has risen by 0.4 to 0.8 degrees Celsius over the last nearly 120 years. According to current estimates, doubling the CO2 concentration will result in a temperature increase of between 1.0 and 3.5 degrees Celsius. CO2 contributes 50% of the greenhouse effect, and other trace gases contribute about 50% as well.

Q 1. Living in the atmosphere of CO is dangerous because it:

Q 2. Most hazardous metal pollutant of automobile exhaust is:

Q 3.In the absence of greenhouse gases-

Q 4.The aromatic compound that is present as particulates is:

Q 5.If a lake is contaminated with DDT, its highest concentration would be found in: 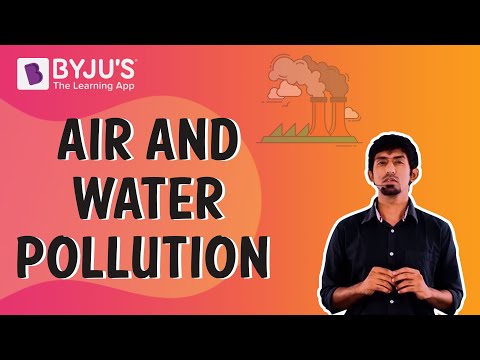