Alcohols provides the first example of how the parent alkane was the starting point for the nomenclature of all families of compounds. The -ane suffix is modified in a systematic manner to indicate the presence of a functional group. Alcohol is named by identifying the longest straight carbon chain containing the -OH group. The -ane suffix is replaced with -anol and the location of the -OH group on the chain is designed by a number.

The generic IUPAC name for alcohol is alkanols, and they are represented in reactions by the general formula R-OH. The presence of other substituents in alcohol is indicated by their names and numerical positions, always keeping the lowest possible number for the hydroxyl group.

The following procedure should be followed in giving alcohol IUPAC substitutive names.

The following example shows how the rules are applied. 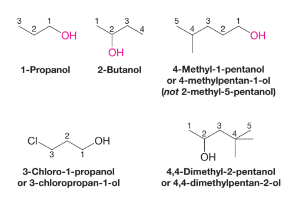 Types of Nomenclature in Alcohols

There are three systems of naming alcohols

Ethanol is known as ethyl alcohol, grain alcohol and the spirit of wine. The first system of nomenclature for alcohol which was based on the use of the term “carbinol” for methanol was originated by a 19th-century German chemist Harmann Kolbe. The present accepted systematic nomenclature for alcohol was adopted by the International Union of Pure and Applied Chemistry in Paris in 1957.

This compound has a three-carbon chain, so the parent alkane name is propane. Because the compound contains three hydroxyl groups, the suffix must be -triol. Therefore, the name is 1,2,3-propanetriol.

The common name of this compound is glycerol is also called glycerin and it is an important by-product in the manufacture of soaps.

Test Your Knowledge On Nomenclature Of Alcohols!
Q5