Petroleum is yellow-black oil that is taken out from the earth’s crust. It is commonly called crude oil. Petroleum consists of a number of organic compounds that can be separated by the fractional distillation method. Petroleum is a fossil fuel that is formed by the action of temperature and pressure when dead remains of organisms such as algae and phytoplanktons are buried inside the earth’s sedimentary rock layers.

Q1: Where is the natural gas found?

Q2. What is the common name given to Petroleum oil?

Explanation: Petroleum is a thick black-coloured liquid that contains expensive hydrocarbons such as kerosene oil, diesel oil and petrol oil along with natural gas found just above it. Hence, it is called as Black Gold.

Q3. During the drilling of an oil well, which product is extracted first?

Q4. Which process is used to separate out different hydrocarbon compounds from Petroleum?

Explanation: Fractional Distillation is a method of separating a mixture of liquids that have different boiling points.

Q5. Till what temperature is the crude petroleum heated in the Fractional Distillation method to separate out the other hydrocarbon products found in it?

Q6. Which gas is formed when coal is heated in the absence of air?

Answer: The process of burning or heating coal in the absence of air is known as destructive distillation. As a result of this process, coal tar and coal gas are produced. The coal gas is a mixture of gases containing hydrogen (H2), methane (CH4) and carbon monoxide (CO).

Q7. How many different substances are found in coal tar?

Answer: Coal tar consists of as many as 10,000 different chemical substances. Out of these 10,000 chemicals, only 50% of the chemicals have been identified yet.

Q8. What is the name of the process by which coal is formed in nature?

Answer: When dead plants and animals are buried deep inside the earth’s surface, they are decomposed by the action of anaerobic bacteria. During decomposition, the constituting hydrogen and oxygen escapes from the dead plants and animals bodies. Hence, only dense carbon is left behind. This carbon content transforms into a solid mass by the action of pressure and temperature leading to the formation of coal. The process is called carbonization.

Q9. What is the main component of liquified petroleum gas (LPG)?

Answer: LPG consists of many hydrocarbon compounds that are generally limited to 3 or 4 carbons. The main constituents of LPG are liquefied Butane and isobutane.

Q11. What is the difference between the processes of formation of petroleum and coal in nature?

Q12. What are the exhaustible natural resources?

Answer: The fuel resources such as coal, petroleum, natural gas existing in the limited amounts in nature that can be exhausted to a minimum value or even natural reserves going vacant by exceeding human mining and industrial processes are called as Exhaustible natural resources.

Q13. Which kind of coal has the lowest carbon content?

Answer: Out of the 4 different kinds of coal, Lignite is the variety that has the lowest carbon content. This coal is said to be of low quality owing to its low carbon content i.e. 65-70%. Lignite has a high moisture content and low heating value. This coal is mainly used in electricity generation.

Q14. Name the element or compound that is combined with the fuels during the formation of heat and light.

Answer: Combustion is a process of generating heat and light from the fuel. In this process, the fuel combines with the oxygen gas to undergo a combustion reaction after reaching a desired temperature needed to initiate the process known as the ignition temperature.

Q15. Why is Kerosene oil used over petrol in the oil lamps?

Q1. Which of the following fuel emits out more smoke and ash on burning?

Q2. What is the product of incomplete combustion of a fuel?

Q3. What is the drawdown test?

Q4. What is pseudo pressure?

How is crude oil processed? 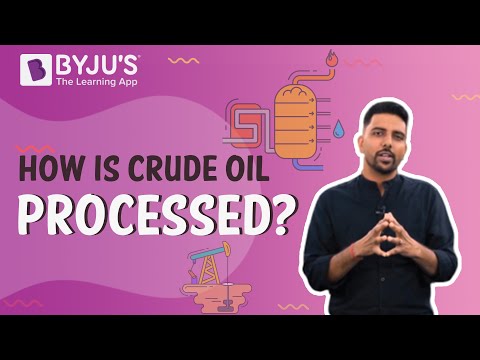