Pinacol Pinacolone rearrangement is a very important process in organic chemistry for the conversion of 1,2 diols into carbonyl compounds containing a carbon oxygen double bond. This is done via a 1,2-migration which takes place under acyl conditions.

The pinacol pinacolone rearrangement process takes place via a 1,2-rearrangement as discussed earlier. This rearrangement involves the shift of two adjacent atoms. This reaction is a result of the work of the German chemist William Rudolph Fittig who first described it in the year 1860.

The IUPAC name of Pinacolone is 3,3-dimethyl-2-butanone. Pinacolone is a very important ketone. It has a peppermint like or camphor like odour and appears to be a colourless liquid.

The pinacol pinacolone rearrangement proceeds through the formation of an intermediate which is positively charged. The methyl group in this intermediate proceeds to migrate from one carbon to another. This reaction can be given by

The Pinacol Pinacolone rearrangement mechanism proceeds via four steps. Each of these steps is explained below.

Step 1: Since the reaction is carried out in an acidic medium, the hydroxide group of the pinacol is protonated by the acid.

Step 2: Water is now removed from the compound, leaving behind a carbocation. This carbocation is tertiary and therefore stable.

Step 3: The methyl group shifts to the positively charged carbon in a rearrangement of the compound.

Step 4: The oxygen atom which is doubly bonded to the carbon is now deprotonated, giving rise to the required pinacolone.

This reaction mechanism can be illustrated as: 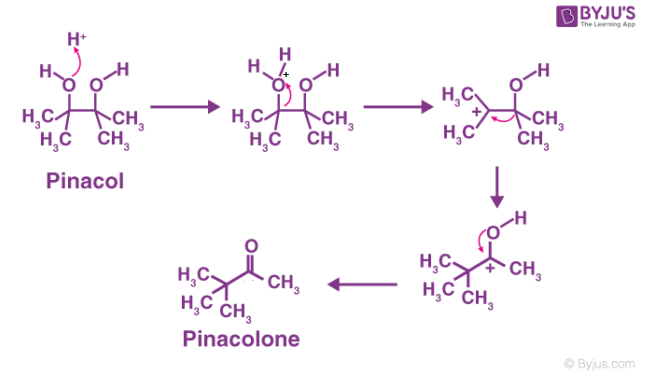 Thus, the required Pinacolone product is generated. It is important to note that this rearrangement is regioselective in nature. The rearrangement of the more stable carbocation yields the major product.

The primary applications of pinacolone are in the drug industry.

What is migratory aptitude?

The ease with which any group undergoes nucleophilic 1,2 shift is known as its migratory aptitude. All the groups do not migrate with equal ease in 1,2 nucleophilic rearrangement.

What is the order of migratory aptitude of different groups?

The ease with which any group undergoes nucleophilic 1,2 shift is known as its migratory aptitude. All the groups do not migrate with equal ease in 1,2 nucleophilic rearrangement.
The migratory aptitude of the phenyl group is more than hydrogen, which is more than the alkyl group. However, we can not apply it to unsymmetrical pinacol substrates. The most stable cation controls the reaction pathway in an unsymmetrical pinacol.

What is pinacol pinacolone rearrangement?

The pinacol pinacolone rearrangement is an approach to convert a 1,2-diol to a carbonyl compound. It takes place under acidic conditions. The name of the reaction derives from the rearrangement of pinacol to pinacolone.

What is the IUPAC name of the simplest pinacol?

The IUPAC name of the simplest pinacol is 2,3- dimethyl- 2,3- butanediol. 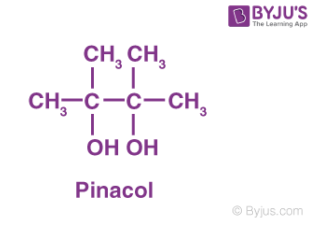 What is a rearrangement reaction?

A rearrangement reaction is a comprehensive class of organic reactions where an organic substituent migrates from one atom to another in the same or different species, resulting in a structural isomer of the original molecule.
For example, alkene on heating with a strong acid yields isomeric alkene.