Distillation refers to the selective boiling and subsequent condensation of a component in a liquid mixture. It is a separation technique that can be used to either increase the concentration of a particular component in the mixture or to obtain (almost) pure components from the mixture. The process of distillation exploits the difference in the boiling points of the components in the liquid mixture by forcing one of them into a gaseous state.

It is important to note that distillation is not a chemical reaction but it can be considered as a physical separation process. An illustration describing the laboratory setup that is generally used to execute this process is provided below.

The distillation performed on a laboratory scale often uses batches of the liquid mixture whereas industrial distillation processes are generally continuous, requiring a constant composition of the mixture to be maintained.

The temperature at which the vapor pressure of a liquid becomes equal to the pressure of the surrounding area is known as the boiling point of that liquid. At this temperature point, the liquid is converted into its vapor form via the formation of vapor bubbles at its bulk.

When a mixture of liquids is heated, the vapor pressure of the individual components increases, which in turn increases the total vapor pressure. Therefore, the mixture cannot have multiple boiling points at a given composition and pressure.

Why is it Impossible to Completely Purify a Mixture by Distillation?

At the boiling point of a mixture of liquids, all the volatile constituents boil. However, the quantity of a constituent in the resulting vapor is based on its contribution to the total vapor pressure of the mixture. This is why the compounds with higher partial pressures can be concentrated in the vapors whereas the compounds having low partial pressures can be concentrated in the liquid.

Some important types of distillation include:

Fractional distillation is often used to separate mixtures of liquids that have similar boiling points. It involves several vaporization-condensation steps (which takes place in a fractioning column). This process is also known as rectification. The apparatus required to perform a fractional distillation on a mixture is listed below.

When heated, the liquid mixture is converted into vapors that rise into the fractioning column. The vapors now cool and condense on the walls of the condenser. The hot vapors emanating from the distilling flask now heat the condensed vapor, creating new vapors.

Many such vaporization-condensation cycles take place and the purity of the distillate improves with every cycle. An illustration depicting a fractional distillation setup is provided below. 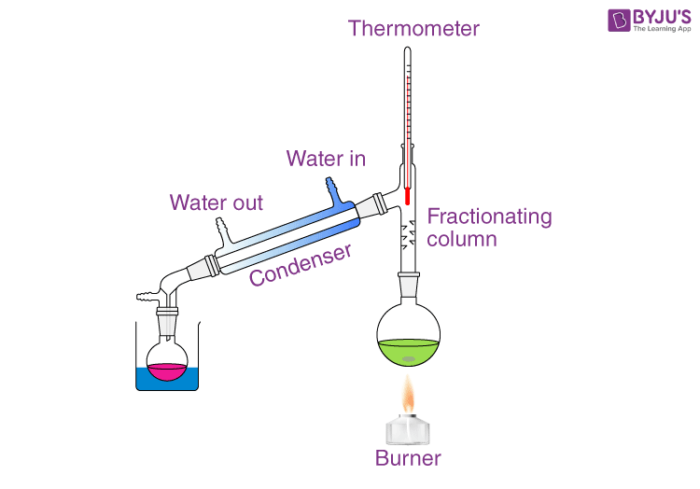 Short path distillation is used to purify a small quantity of a compound that is unstable at high temperatures. This is done under lowered pressure levels and generally involves the distillate traveling a very small distance before being collected (hence the name ‘short path’). The reduced distance traveled by the distillate in this method also reduces the wastage along the walls of the apparatus.

The process of zone distillation involves the partial melting of a substance and the condensation of the resulting vapors to obtain a pure distillate. This is carried out in a long container with the help of a zone heater.

The method of distillation has a considerable history, dating back to 3000 BC. Evidence suggests that the distillation of alcohol was developed as far back as the 9th century. Some important applications of distillation are listed below.

To learn more about distillation and other related topics, such as sublimation, register with BYJU’S and download the mobile application on your smartphone.