Epimer in stereochemistry specifies one of a pair of stereoisomers.  At the stereogenic centre, two isomers present in the molecule differ, while the rest remains identical. A molecule may contain numerous stereocenters leading to several stereoisomers.

Stereoisomers are isomeric molecules that possess the same constitution and molecular formula, but they vary in three-dimensional orientations of their atoms in space.

Below, stereoisomers illustrate the D and L configurations of glucose. Here, glucose is referred the D and L on the basis of last chiral carbon atom. 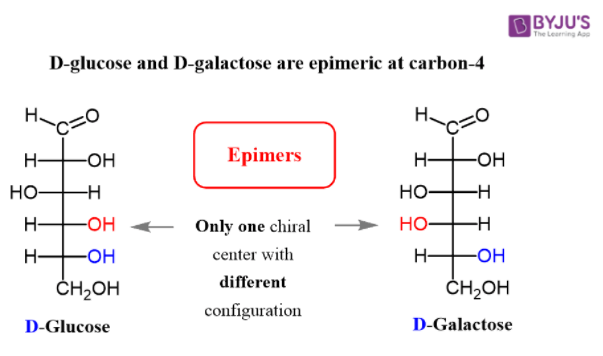 Glucose involves the formation of glycogen, starch, glucose, oligosaccharides and polysaccharides. Due to the presence of carbon in glucose molecule it may exhibit stereoisomerism, that is enantiomers and diastereomers.

Optical isomers or enantiomers are two isomers that are relevant to each other by reflection. They are non – superimposable mirror images of each other. They are comprised of the same physical properties except in a way they interact with several optical isomers of other compounds. Hence, different optical isomers may have variant biological effects.

Diastereomers are stereoisomers that are not mirror images of each other in that they are not linked with reflection operation unlike of enantiomers. They possess the same physical properties. One of the example include meso compounds. The below structure is mesotartaric acid.

Epirubicin and Doxorubicin are epimers that are used in drugs.

What are Epimers with examples?

What are Epimers in biochemistry?

Which is the simplest carbohydrate?

What is the difference between epimers and enantiomers?

What is Mutarotation explain with example?

Take up a quiz on Epimers
Q5