Graphite is a type of mineral found in metamorphic and igneous rocks. It is usually formed when carbon is subjected to high temperature and pressure in the earth’s crust. Graphite is also said to be one of the naturally-occurring forms of crystalline carbon. However, this mineral is an interesting one and is commonly referred to as the mineral of all extremes.

As such, Graphite is soft in nature, it cleaves easily even with light pressure, is greasy and features low specific gravity. Further, this mineral has a black or sometimes greyish colour. It is an excellent conductor of electricity or heat and it can also withstand extreme temperatures. Another significant character of this mineral is that it is chemically inert meaning it is not affected by a majority of reagents and acids.

Graphite is found all over the world in its natural form, and in high quantities as well. However, it is usually classified into three forms namely flake, crystalline, and amorphous depending on the source of the mineral.

Graphite has been used since ancient times. It has a wide range of applications in the modern world too. Let’s look at some common uses of graphite below.

The word graphite is from the Greek language which translates as ‘to write’. So the most common use of graphite is in making the lead in pencils. This lead is a mixture of clay and graphite which is in an amorphous form.

Graphite is one of the main ingredients in lubricants like grease, etc. This mineral reacts with atmospheric water vapour and creates a thin film or layer over the surface applied and thus reduces friction. Graphite is also used in car brakes and clutches.

The powdered form of lump graphite is also used in paints. Why? Well, graphite by nature is water-repellent. So it offers a protective coating on wood and other surfaces.

Due to its high tolerance to heat and unchangeability, Graphite is a widely used refractory material. It finds its use in the manufacturing industry and it helps in the production of glass and steel as well as processing of iron.

Graphite can absorb fast-moving neutrons. As a result, it is used in reactors to stabilize nuclear reactions.

Crystalline flake graphite is used in the manufacturing of carbon electrodes, brushes, and plates needed in dry cell batteries and the electrical industry. Interestingly, natural graphite is also processed into synthetic graphite. This type of graphite is useful in lithium-ion batteries.

Graphite can be used to make graphene sheets. These sheets are said to be 100 times stronger and 10 times lighter than steel. This derivative of graphite is further used in making lightweight and strong sports equipment. Many are considering future applications in the field of medical and aerospace industry.

Structure and Properties of Graphite 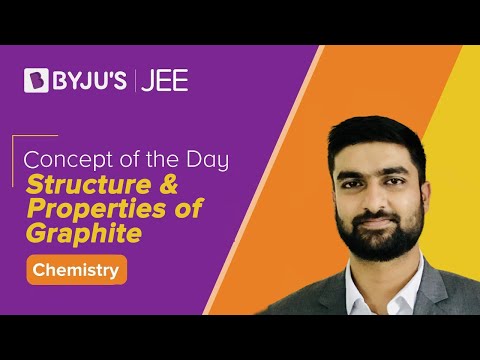 Why is graphite used in pencil?

This slippery-sheet form is what makes the touch of graphite so sloppy and makes it such a strong writing content. The particles of the carbon sheet readily rub off the pencil centre and onto the page. This property also makes it an excellent dry lubricant for graphite powder.

What are two uses of graphite?

In pencils and lubricants, graphite is used. It is a strong heat and energy conductor. In electrical devices such as electrodes, batteries, and solar panels, its high conductivity makes it useful.

Is Graphite an element?

A type of carbon, which is an element, is graphite. The carbon atoms are bound together in graphite and organised into layers. On the right hand of the periodic table, you will find non-metals, and graphite is the only non-metal that is a strong electricity conductor.

Is graphite a tetrahedral structure?

Every carbon atom is covalently bound to four other carbon atoms at the four corners of the tetrahedron. A simultaneous piling of layers of carbon atoms amounts to the crystal structure of graphite. The carbon atoms lie in fused hexagonal rings inside each layer, which stretch infinitely in two dimensions.

Is graphite a good conductor of electricity?

These are some top uses of graphite. To know more about the properties and different types of rocks and minerals you can keep visiting BYJU’S or download our app for interesting content and learning experience.

Test Your Knowledge On Uses Of Graphite!
Q5