An Introduction to Pronouns

By definition, a Pronoun is a word which is used in place of a noun. To avoid repetition of nouns in a sentence or paragraph, a pronoun is used.

For competitive exam aspirants, having good grammatical knowledge is a must. Thus, focussing on pronouns can also be extremely helpful.

In this article, we shall discuss the types of pronouns and rules of using it. Also, sample questions from the exam perspective have been given. To learn more about General English for Competitive Exams, candidates can visit the linked article.

The pronoun is a part of speech and the commonly used pronouns include I, she, he, they, them, we, etc. Among its various types, the personal pronouns are the ones which are used the most.

Given below is a video for candidates who wish to learn in detail about Pronouns from the Experts themselves. The videos are specially curated to assist candidates to understand the usage and application of pronouns in a sentence: 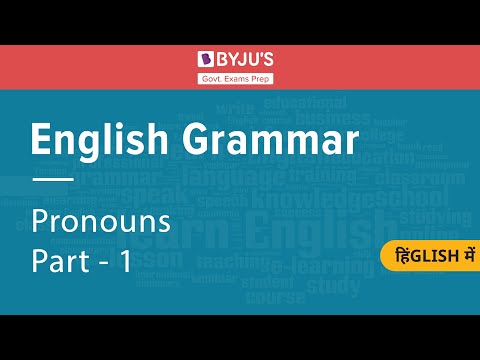 Discussed below are the different types of pronouns:

The pronouns which are placed as a substitute for people or things are called personal pronouns. These are of two types: subjective and objective. This means, that the pronoun can act either as the subject or for the object of the sentence.

Replacing the nouns with Pronouns: They were going to play Badminton.

Statement: Can you please go to the market with Arpit?

Replacing the noun with Pronoun: Can you please go to the market with him?

The personal pronouns which indicate the possession of something are called possessive nouns. They can be used both in singular and plural form.

Example 1: This dress is mine.

Example 2: The books are theirs.

Pronouns like himself, myself, themselves, etc. where the action is being performed on oneself are called reflexive pronouns.

Example 1: I decorated the room all by myself.

Example 2: She drove 500 kilometres by herself.

When the noun which is to be replaced does not have a fixed name or number, then such nouns are replaced by indefinite pronouns. These include few, everyone, all, etc.

Example 1: Everyone has reached the concert.

Example 2: You bring me some apples.

Pronouns like Who, Where, Which, Whom, etc. which tend to ask a question are called interrogative pronouns.

Example 1: Which plant is this?

Example 2: Who went to the airport?

The pronouns which are used to connect a clause or a statement are called relative pronouns.

Example 1: I watch which I bought was defective.

Example 2: The man who came yesterday was a fraud.

The pronouns which describe or modify a thing or a person are called demonstrative pronoun. They can be both singular and plural.

Example 1: These flowers are beautiful.

Example 2: This girl is very helpful.

All the above-mentioned pronoun types are used often by people in their day to day lives but their correct usage and the application have been described in detail here.

There are three cases in which pronouns can be classified. These include:

To understand the three cases even better, refer to the table given below:

Given below are a few difference between articles related to English Grammar and Literature which will help candidates clear a few more of their doubts:

Since the questions asked in competitive exams not very direct but may be asked in the form of fill in the blanks or incorrect statements. Thus, it is important for candidates to know the rules of pronouns to ensure that they make no mistake in questions based on the same.

Pronouns Rule 1: Pronouns which are compared must be in the same case.

Example: Our mother supports me more than her.

Example 1: I helped him

Example 2: He helped me

Pronouns Rule 3: If the pronoun is an object of the verb, it should be in the objective case.

To learn in detail about the three mentioned rules of pronouns, candidates must refer to the video given above in this article and get a better understanding of the same.

Aspirants can practise questions based on Verbal Ability for various competitive exams in the links given below:

Given below are questions where two pronouns have been given for each statement. Choose the correct pronoun from the given options.

Q 1. My sister loves to read books. (She/Her) is a thorough reader.

Answer: My sister loves to read books. She is a thorough reader.

Answer: Smriti completed the packing herself.

Answer: The dress that I bought yesterday needs to be altered.

Answer: The boxers punched each other.

Answer: These stairs are extremely steep.

Pronoun based questions may be asked in the corm of cloze test, error detection or any other question type. Thus, understanding pronouns is important for all Government aspirants.

To practise more questions and to understand the type of questions asked in Verbal ability candidates must solve Free Online Quizzes.

Candidates can also check the Preparation Strategy for Competitive Exams at the linked article and start their preparation accordingly.

For any more update on upcoming Government exams or study material, turn to BYJU’S for assistance.

Given below is the continued part of the video which may help Bank, SSC, RRB, Insurance and other govt exam aspirants to understand Pronouns even better. 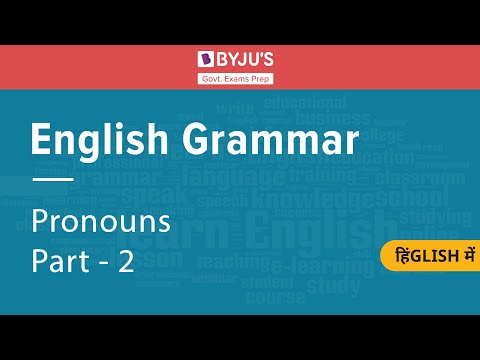