Wave motion is the key concept of Physics that can be understood in various ways. Change in frequency of a wave in relation to an observer who is moving relative to the wave source is explained in Doppler shift or Doppler effect. In this article, let us learn in detail about the Doppler shift.

What is Doppler Shift?

Doppler shift is also known as the Doppler effect is defined as the change in the wavelength or frequency of the waves with respect to the observer who is in motion relative to the wave source. Doppler shift was theorised in the year 1842 by the Austrian physicist Christian Doppler.

What is Doppler Shift Formula

Above is the Doppler shift or Doppler effect formula explaining the relationship between observed frequency and the emitted frequency where the speed of source and receiver is lower than the velocity of the waves in the medium.

Following is the formula when the speeds of receiver and source are comparatively lower than the speed of the wave:

To know more about the doppler effect, click on the video below. 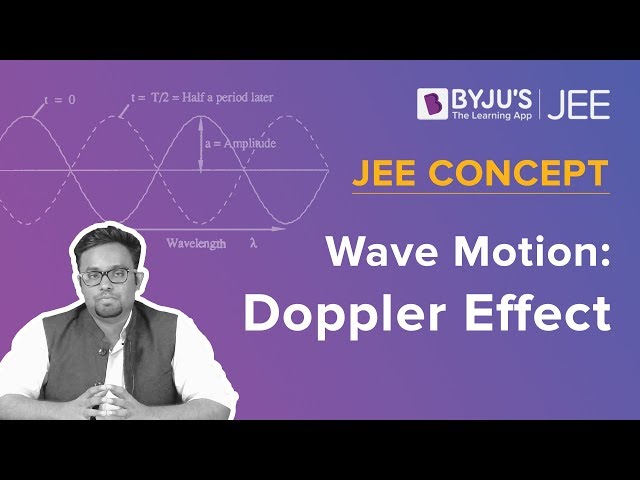 \(\begin{array}{l}v_{radial}=v_{s}.cos\Theta\end{array} \)
where Ө is the angle between the object’s line of sight and the forward velocity.

In astronomy, Doppler effect for electromagnetic waves of light results in either red-shift or blue-shift. With the help of Doppler effect and radial velocity, one can measure the speed at which stars or galaxies are receding or approaching from us.

Ultrasonic Doppler Velocimetry is used to measure the real-time completion velocity profile of any liquids containing suspended particles like dust, emulsions and gas bubbles. The flow can be pulsating, laminar or turbulent, oscillating or stationary.

What is a Doppler Shift?

The Doppler Shift or the Doppler Effect is the change in frequency of a wave in relation to an observer who is moving relative to the wave source.

What is the difference between the Doppler shift and Doppler Effect?

More precisely the term Doppler effect refers to the change in the observed frequency of a wave when the source & the observer moves relative to the medium. Doppler shift is the movement of source or observer with respect to the medium.

What does a large Doppler Shift indicate?

Why is Doppler shift important for astronomy?

In astronomy, the Doppler effect for electromagnetic waves of light results in either red-shift or blue-shift. With the help of the Doppler effect and radial velocity, one can measure the speed at which stars or galaxies are receding or approaching us.
Stay tuned with BYJU’S for more such interesting articles. Also, register to “BYJU’S – The Learning App” for loads of interactive, engaging Physics-related videos and unlimited academic assistance.
Test your knowledge on Doppler shift
Q5