What is Equivalence Principle?

In the general theory of relativity developed by Albert Einstein, the equivalence principle explains about “equivalence of inertial mass and gravitational mass”.

He observed that the force due to gravity (gravitational force) experienced by a person standing on the massive object (for example earth) is equivalent to the pseudo-force experienced by the observer in the non-inertial frame of reference (accelerated).

In the theory of general relativity, the equivalence principle is the equivalence of gravitational and inertial mass, and Albert Einstein’s observation that the gravitational “force” as experienced locally while standing on a massive body (such as the Earth) is the same as the pseudo-force experienced by an observer in a non-inertial (accelerated) frame of reference.

Albert Einstein realized that there is some complexity between Newton’s theory of gravity and his own theory of special relativity. He looks into the universe in a completely different way!

As we know, during the year 1905 Albert Einstein set a milestone in physics with his new framework on laws of physics, which is his theory of special relativity. Nonetheless, one facet of physics seemed to be incomplete; The gravitational force theory developed by Newton. The special theory of relativity enfolded space and time excluding gravity. Years later, Albert Einstein managed to unify gravity with his relativistic ideas on space and time. As a result, another revolutionary theory emerged. “The general theory of relativity”.

The very first step towards a general theory of relativity was the realization that, Even within a gravitational field, there exists a reference frame in which gravity is almost zero/absent.

Thus, at least to a certain approximation, one can say gravity-free laws of special relativity governs the laws of physics, if and only if the observations are confined within a small region of space and time. This derived from what he formulated as equivalence principle which, in turn, is inspired by the consequence of a freefall.

What is Effective Mass?

Mass is a property of any physical object, It is a measure of resistance to the acceleration in the presence of external force. Effective mass is the terminology used in the general theory of relativity which talks about gravitational mass and inertial mass.

Gravity: Tendency of massive object to attract each other. Gravitational force between two bodies is given by equation (1):

Inertia: Resistance offered by the body against the change in its current state of motion. Force involved here is given by equation (2):

Principle of equivalence comes up with an idea, saying equation (1) and (2) are the same. That is:

On rearranging the above equation we get-

Imagine you are standing in an elevator or, precisely, is something inside which looks very similar to an elevator cabin. You are totally isolated from the outer world. Under these circumstances, if you take an object and drop it, it falls down and reaches the floor/base. This is the most expected way you expect, considering your experience here on earth. The situation is depicted in the diagram.

Will the effect be the same if the elevator is subjected under the gravitational field, similar to that of the earth? 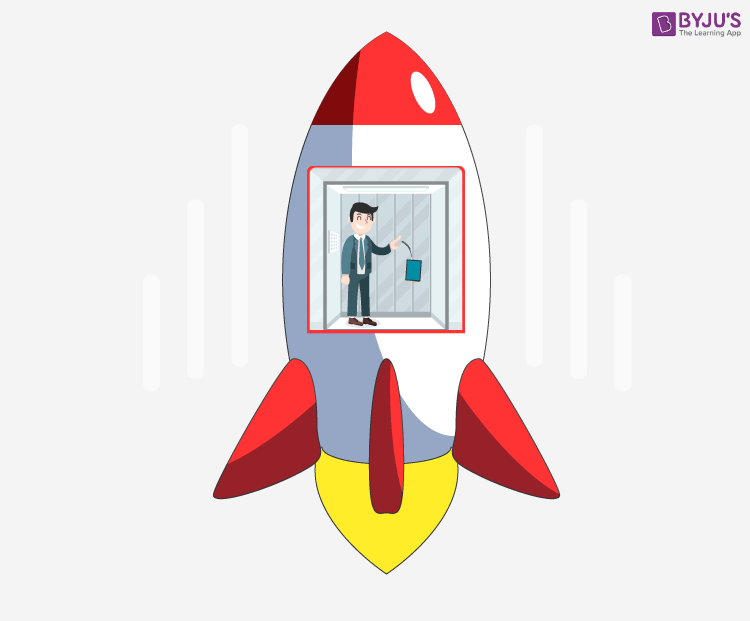 Inside a rocket accelerating at 9.8 meters per square second

Not necessarily! Theoretically, you may be situated in deep space, far away from the gravitational influence of any significant mass concentration. The cabin you are standing in can be inside a rocket which is accelerating at 9.8 meters per square second. The situation is illustrated clearly in the diagram.

In such a scenario, you drop off an object, The object would experience an acceleration of 9.8 meters per square second from cabin floor- exactly the same acceleration as that an object experience during free fall here, right on earth. Now as you, as an observer standing inside a cabin floor can hardly differentiate two situations. From your frame of reference situations will be indistinguishable: are they falling under the gravity of a massive object like earth? Or is it the cabin floor accelerating them?

Thus, Einstein formulates his Principle of equivalence stating that “No experiment can be performed that could distinguish between a uniform gravitational field and an equivalent uniform acceleration.”