We can define energy as the capacity to do work. There are various forms of energy. The law of conservation of energy states that energy can neither be created nor be destroyed. It can only be transferred from one form to another. Some forms of energy are defined and discussed in this article. 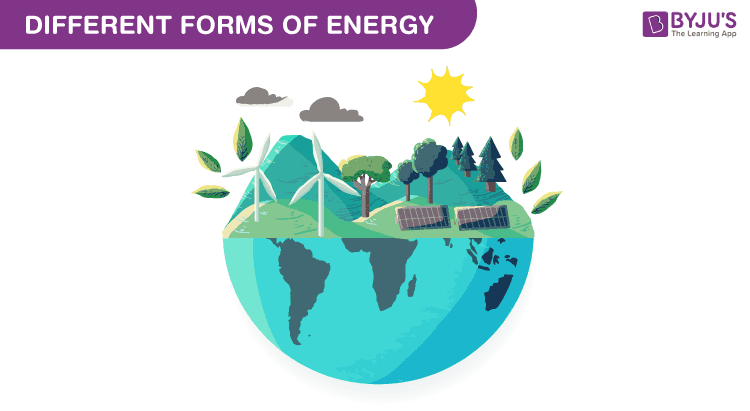 When you leave a cup of hot coffee unattended for some time, you find that the coffee has cooled down. This is because it lost heat to the surrounding which is at a lower temperature when compared to the coffee.

Plants use solar energy, carbon dioxide, and water to synthesize food. This food is consumed by humans and animals, is broken down in their bodies, and they get energy for life activities. They are all examples of chemical energy.

Chemical energy is the energy that is stored in the bonds of chemical compounds. Moreover, a chemically stable compound has less energy stored in it as compared to its separate parts. When a chemical reaction takes place, there is a change in the arrangement of atoms which results in either absorption (endothermic) or a release (exothermic) of energy.

You might be aware of the infamous bombings of the cities of Hiroshima and Nagasaki during World War II which caused the destruction to the extent that its consequences can be seen even today. Those were the nuclear bombs which are considered as one of the most dangerous inventions of mankind till date.
Nuclear energy is the energy in the nucleus of an atom. The energy is released during nuclear fusion or fission reactions. And the energy released is really vast. When the reaction is controlled, it can be used to generate electricity. Under uncontrolled nuclear fission reactions, nuclear weapons are created.

The Equivalence of Mass and Energy

An equation given by Einstein explains the relationship equivalence of mass and energy. According to it, the energy of a body is equal to the products of the mass of the body and the square of the speed of light. The famous equation is

Where E is the energy, m is the mass of the body and c is the speed of light in a vacuum which is approximately equal to 3 x 108 m/sec.