What is Hubble’s Law?

Hubble’s law statement is given as

The velocity of the galaxy which is also known as the redshift is directly proportional to its distance.

Hubble’s law is also known as Hubble-Lemaitre law, studied in physical cosmology. Only with the help of Hubble’s law the universe can expand and fulfill the cosmological principle.

Hubble’s law formula is given in the following table:

By determining the shift in observed light into redshift in the spectrum, one can determine the distance of the galaxy from us using Hubble’s equation after measuring the recession velocity. Following are the limitations of Hubble’s law which makes the measurement challenges:

What is Hubble Constant?

Hubble constant is defined as the unit of measurement, which is used for describing the expansion of the universe. Hubble’s constant H is 160 km/s per million-light-years.

Redshift is the phenomenon in which an object’s wavelength increases due to electromagnetic radiation. Blueshift is opposite to redshift where the energy increases due to shorter wavelengths which are also known as negative redshift. The main reasons for redshift are as follows:

Interpretation of Redshift And Distance 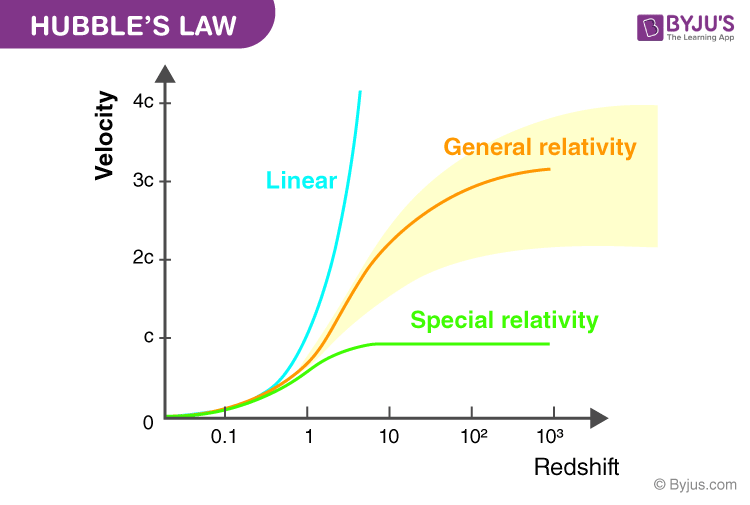 Above is the linear relationship between the redshift and distance and the mathematical expression for Hubble’s law as follows:

The redshift formula is given in the below table:

There are three units that are derived from Hubble constant, and they are:

Hubble time is given as follows:

The Hubble length is defined as the product of the speed of light and the Hubble time. It is also known as the Hubble distance. The product obtained is equivalent to 14.4 billion light-years.

What is Hubble’s law used for?

In what situations does Hubble’s law not apply?

Hubble’s law is not applicable for understanding the motion of stars in the Milky Way galaxy or other heavenly objects in the Solar system. It is applicable to distant galaxies.

Why is Hubble’s law so important?

Hubble’s law is considered to be so important because of the value of Hubble constant, H which is used for determining the exact age of the universe. It also helps in understanding the Dark matter and Dark energy.

What is the value of Hubble’s constant?

The value of Hubble’s constant was determined by Planck and found it to be equal to 46,200 mph per million light-years.

Why is Hubble’s constant uncertain?

Hubble’s constant is said to be uncertain as to the constant changes with time. However, the expansion of the universe is constant throughout the space and at every location. This is the reason why it is called Hubble’s constant.