Over the years we have observed how technology has managed to squeeze itself to a more compact and concise structure. For instance, the first computers that were made were the size of a warehouse of 1000 laptops which we use today. How has this been made possible? The integrated circuit is the answer to it.

The circuits that were made previously were large and bulky, consisting of circuit components like resistor, capacitor, inductor, transistor, diodes, etc. which were connected together with copper wires. This factor limited the use of the circuits to big machines. It was not possible to create small and compact appliances with these big circuits. Moreover, they were not entirely shock proofed and reliable.

As it is said, necessity is the mother of all inventions. There was a need to develop circuits of smaller size with more power and safety to incorporate them into devices. Three American scientists invented transistors which simplified things to quite an extent, but it was the development of integrated circuits that actually changed the face of the electronics technology.

What is an Integrated Circuit(IC)?

An integrated circuit is a small chip of a semiconductor material that mounts an entire circuit on itself. It is very small when compared to the standard circuits which are made of the independent circuit components, about the size of a fingernail. Currently, the most commonly used one is the monolithic integrated circuit. 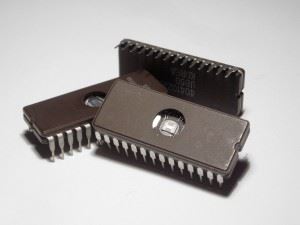 Integrated circuits are used in almost every electronic appliance or equipment that we see or use today like mobiles, televisions, computers, and even toys.

Integrated circuits can be categorized into two types based on the nature of the input signals:

To learn more about the integrated circuit, download BYJU’S – The Learning App.