The lithosphere is the rigid, outermost shell on Earth. It is composed of the crust and the portion of the upper mantle that behaves elastically on time scales of thousands of years or greater. The outermost shell of a rocky planet, the crust, is defined on the basis of its chemistry and mineralogy. 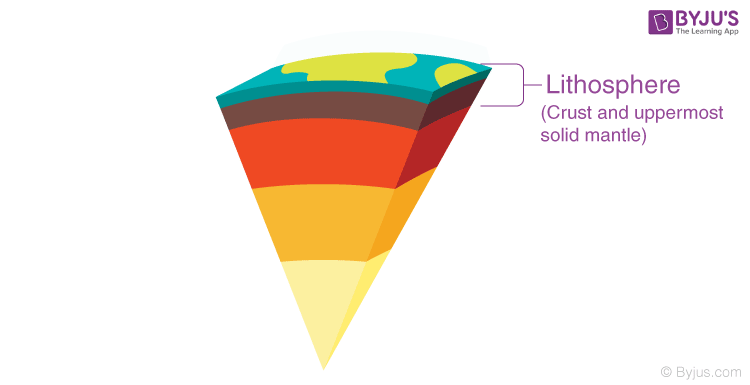 This includes the crust and the uppermost mantle, which constitute the hard and rigid outer layer of the Earth. The uppermost part of the lithosphere that chemically reacts to the atmosphere, hydrosphere, and biosphere through the soil-forming process is called the pedosphere.

The earth’s crust is not a homogeneous substance; it has different layers of rocks including sedimentary rocks on top, granitic and metamorphic rocks in the middle, and basaltic rocks on the bottom.

The earth’s crust also consists of several large dynamic tectonic plates. These tectonic plates move slowly but continuously at an average rate of around 10 cm. Considering this, there was no Atlantic Ocean, and North America and Europe together were one continent 180 million years ago. The Atlantic Ocean came into being because of the drifting apart from the Eurasian and North America plates.

There are two types of lithosphere:

Test your knowledge on Lithosphere
Q5