Energy is required for the evolution of life forms on earth. However, a significant portion of the energy which we use today is obtained from non-renewable sources. This implies that once they are used up, they cannot be replenished. The most important source of non-renewable energy used extensively is fossil fuels which have taken millions of years to be formed. Thus, it is important to use them judiciously. This requires us to look for alternate sources. We know that energy exists in different forms in nature and that it cannot be created or destroyed. But it can be transferred from one form to another. The energy from nature- the sun, the wind, waves, tides, etc. can be converted into a usable form. One of these renewable sources of energy is tidal energy.

The gravitational forces of the sun and the moon combined with the rotation of the earth result in an alternate rise and fall of the sea levels. At one particular place, it usually occurs twice on a lunar day. The rise of the sea level is called the high tide, whereas the fall is called the low tide. When the earth and moon’s gravitational field are in a straight line, the influences of these two fields become very strong and causing millions of gallons of the water flow towards the shore resulting in the high tide condition. Likewise, when the moon and earth’s gravitational fields are perpendicular to each other, the influences of these fields become weak, causing the water to flow away from the shore resulting in a low tide condition.

When the moon is perfectly aligned with the earth and the sun, the gravitational pull of the sun and the moon on the earth becomes much stronger and the high tides much higher and the low tides much lower during each tidal cycle. This condition occurs during the full or new moon phase. Such tides are known as spring tides. Similarly, another tidal situation emerges when the gravitational pull of the moon and sun are against each other cancelling their effects. This results in a smaller difference between the low and high tides due to the smaller pulling action on the seawater, thereby resulting in weak tides. These weak tides are known as neap tides. Neap tides occur during the quarter moon phase. What is Tidal Energy?

Tides are a regular phenomenon. They can be predicted over months and years in advance. This is why the energy from this massive movement of water can be harnessed and converted into a usable form of energy. 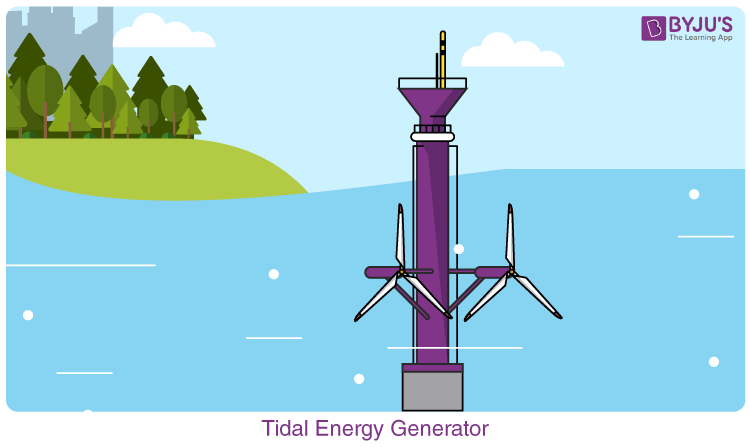 The energy obtained from the rise and fall of tides is called the tidal energy.

Tidal barrages or dams are constructed across a narrow opening to the sea. Water rushes into the dam when the sea level rises. This moves the blades of the turbines which are attached at the opening of the dam. This results in the generation of electricity.

Advantages and Disadvantages of Tidal Energy

Some advantages of tidal energy are:

Some of the disadvantages of tidal energy are:

Although not widely used, tidal energy has the potential for future electricity generation. Among other sources of renewable energy tidal energy has suffered due to the relatively high cost and limited availability of sites for construction. However, due to the recent technological developments indicating that the economic and environmental costs can be brought down to competitive levels, there seems to be a bright future for tidal energy generation.