There are two types of strain :

What is a Longitudinal Strain?

A longitudinal strain is defined as

Change in the length to the original length of an object

It is caused due to longitudinal stress and is denoted by the Greek letter epsilon 𝜺.

It is expressed as \(\varepsilon =\frac{\Delta L}{L}\). Here the fundamental unit of length is the meter. Substituting it in the formula we get:

They cancel each other, making it unit less or dimensionless quantity. 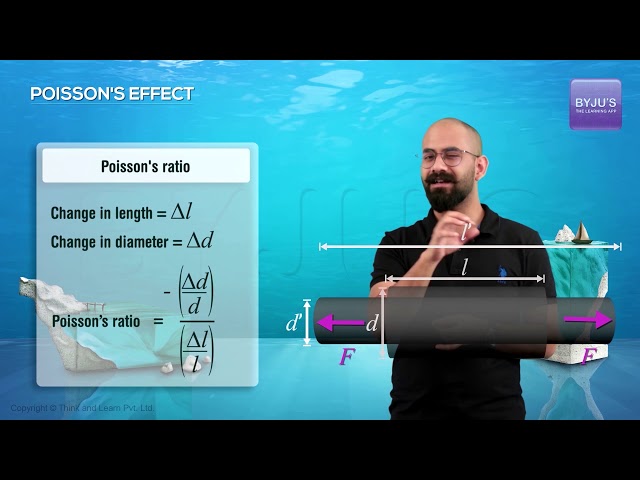 Stress and strain are like two sides of a coin. It is important to know their behaviour at microscopic scales. We know that all solids are elastic by nature. Atoms or molecules constitute them. Each atom or molecule is surrounded by neighbouring atoms or molecules. Each atom or molecule surrounded by neighbouring atoms or molecules are bonded together by intermolecular forces and stay in equilibrium. When a deforming force or external force is applied, their intermolecular or inter-atomic distances vary. As a result, a restoring force will be generated to attain back the equilibrium, thereby regaining original size and shape.

Consider a cylinder (figure above) with L as length and D as the diameter. What happens to the cylinder when an equal force is applied such that it is perpendicular to the cross-sectional area? The answer is there will be a change in its length as well as in diameter. The length will increase from L to L+ΔL and Diameter will reduce from D to D-ΔD. Thus, the change in dimension to the original dimension is defined as strain. It tells the amount of stress an object is experiencing.