What is a Rainbow? A rainbow is regarded as one of the most spectacular light shows observed on the earth. A Rainbow is a multicoloured arc made due to the striking of light on water droplets. It is an optical illusion which means that it doesn’t exist in a specific spot in the sky. It depends on where you are standing and the position of the sun or other sources of light.

How to Make a Rainbow?

Sir Issac Newton was the first one to identify that white light was made of all the colours of the visible spectrum. He also showed us that the white light could be split into different colours by a process known as refraction. To refract light, he made us of the prism but it is to be noted that water can also be used to refract visible light. In the experiment listed below, we make use of the concept of density to make a rainbow in a jar. Let us look at the materials needed and the procedure of the experiment in the next section.

This experiment focuses on density. Here we are making a rainbow in a jar using this amazing concept of density. 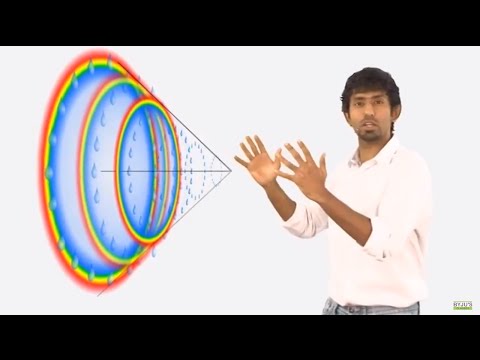 Different levels of density are created when the different amount of sugars are added. As you can notice the layer at the bottom of the glass was the heaviest and rest of the layers were placed on the top of each layer. The layers may mix sooner or later, and that may be referred to the concept of dynamics. The effect lasts for a long period of time only when a greater difference in density.

Test your Knowledge on Rainbow
Q5