What is Satellite Communication?

Telephone, radio, television, internet, and military applications use satellite communications. Believe it or not, more than 2000 artificial satellites are hurtling around in space right above your heads.

The communication satellites are similar to the space mirrors that help us in bouncing the signals such as radio, internet data, and television from one side of the earth to another. There are three stages that are involved which explain the working of satellite communications. These are:

Let’s consider an example of signals from a television. In the first stage, the signal from the television broadcast on the other side of the earth is first beamed up to the satellite from the ground station on the earth. This process is known as uplink.

The final stage involves a downlink in which the data is sent to the other end of the receiver on the earth. It is important to understand that usually there is one uplink and multiple downlinks.

It’s interesting to know that the Indian National Satellite (INSAT) system is one of the largest domestic communication systems that is placed in the geo-stational orbit. There are more than 200 transponders in the INSAT system and are used for various purposes such as telecommunications, weather forecasting, television broadcasting, disaster warning, search and rescue operations, and satellite newsgathering.

Below is the list of communication satellites along with their applications:

To avoid mixing up and interference of signals, every user is allocated a specific frequency for transmitting it. The International Telecommunication Union does this frequency allocation. Geosynchronous satellites are of note here. Geostationary orbit is present at the height of 35786 km above Earth’s surface. If you can spot such a satellite with a telescope from Earth, it will appear stationary to you. The orbital period of the satellite and the rotational rate of the Earth is in sync.

Have A Look At This GIF About Geostationary Orbits

These were some typical orbits. Apart from these we also have orbits that address particular problems. The Russians faced one such issue. GEO satellites worked perfectly for the equatorial regions, but it had a very weak coverage near the Poles. To address this problem, the Russians designed an orbit with a very high inclination. The inclination is the angle between the satellite’s orbit and the equator. This orbit was called the Molniya orbit. The orbit had excellent coverage of the North Pole for a short time. Molniya had a period of 24 hours,  but out of that, it would be close to Earth only for 6-9 hours. Russia launched some more satellites in the same orbit and soon they had uninterrupted coverage. There are two categories in which the satellite communication services can be classified:

In one-way satellite communication, the communication usually takes place between either one or multiple earth stations through the help of a satellite.

Following is the figure which explains the one-way satellite communication: 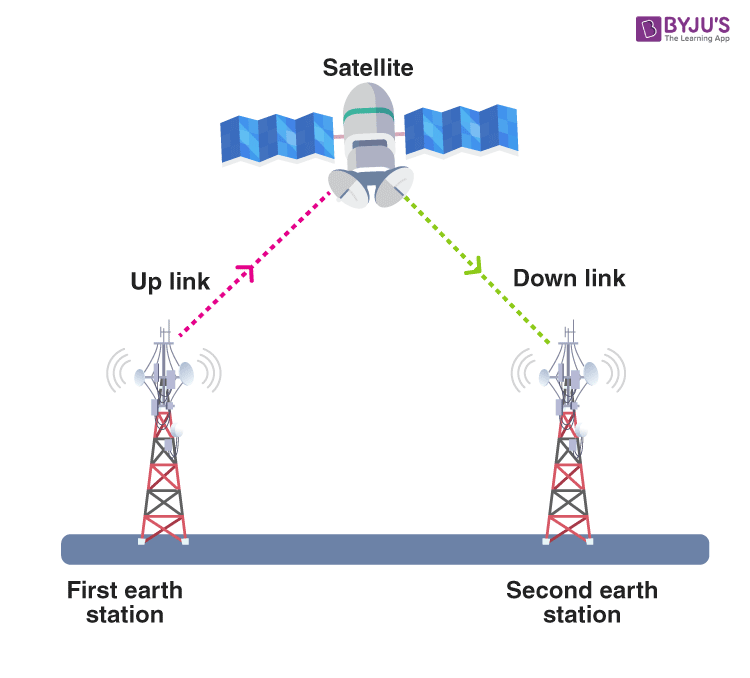 In two-way satellite communication, the information is exchanged between any two earth stations. It can be said that there is a point to point connectivity.

The signal is transmitted from the first earth station to the second earth station such that there are two uplinks and two downlinks happening between the earth stations and the satellite.

Following is the figure of the two-way satellite communication: 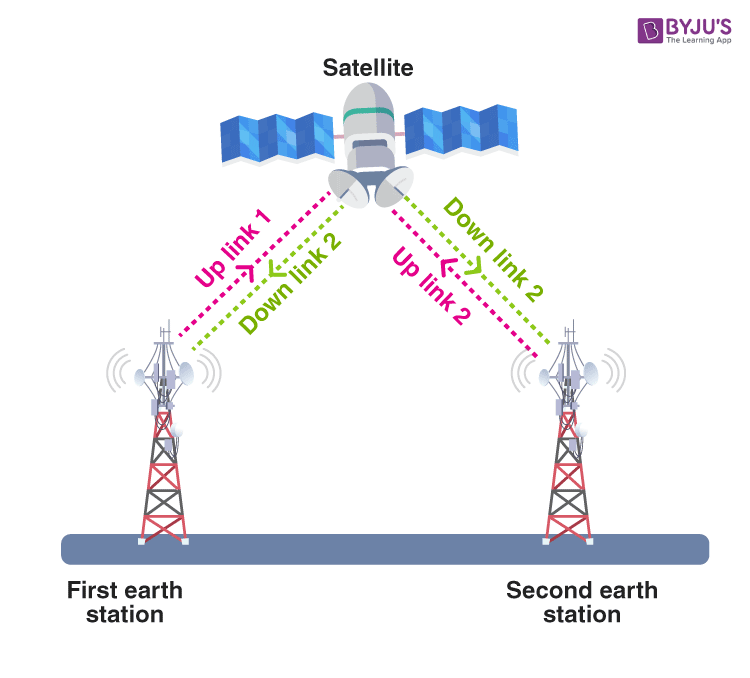 The following are the advantages of satellite communication:

The following are the disadvantages of satellite communication:

What are the two main components of satellite communication?

The two main components of satellite communication are:

Name the countries having their own satellites.

There are total of 12 countries that are having their own satellites. Few of them are listed below:

What is a space station?

A space station is an artificial structure that is designed for humans to live and work in outer space.

What are the three laws of Kepler?

Following are the three laws of Kepler:

List the factors on which the carrier to noise ratio of a satellite depends on.

Following are the three factors on which the carrier to noise ratio depends on for a satellite: