What is 2,4-Dinitrophenylhydrazine (2,4 DNP Test)?

The structure of 2,4-Dinitrophenylhydrazine is given below.

Although it’s not a familiarly substituted hydrazine, we can make a reasonable inference that hydrazine H2N-NH2 is a good nucleophile. So the synthesis of 2,4-Dinitrophenylhydrazine can be done from the product, it is prepared by reacting hydrazine with 2,4-dinitrochlorobenzene. The electron-accepting effect of the two nitro groups makes this chloride easy to displace.

Since chlorine is ortho, para directing and deactivating, so we should nitrate chlorobenzene. Chlorobenzene is readily prepared from benzene itself, so the synthesis is complete and the reaction is given below. 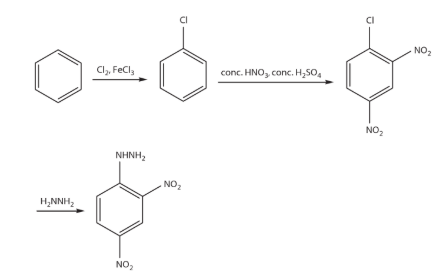 Benzoic acid is used as an antiseptic in medicines meant for urinary disorders and in vapour form for disinfecting bronchial tubes.

The carbonyl compound is simply mixed with an acid solution of Brady’s reagent in methanol. The derivatives are orange coloured crystalline solids called 2,4-dinitrophenylhydrazones. These crystals are filtered off and purified by re-crystallisation.

Their melting temperatures are measured. The original carbonyl compound is then identified by comparing to the tables of melting points of 2,4-dinitrophenylhydrazine derivatives. Brady’s reagent can also be used as a test for the presence of a carbonyl compound because orange crystals appear when it is added to either an aldehyde or a ketone. What does a positive 2/4 DNP test indicate?

2,4-Dinitrophenylhydrazine can be used for the qualitative identification of ketone or aldehyde functional group carbonyl functionality. A positive test is indicated by the formation of a precipitate known as dinitrophenylhydrazone, yellow, orange, or red.

How can you tell the difference between aldehydes and ketones?

2,4-Dinitrophenylhydrazones are, for different reasons, safer derivatives than phenylhydrazones. First, there are higher molecular masses in these derivatives, increasing the volume of substance to be checked. Heavier-mass derivatives also have a greater chance of becoming a solid.

What will a DNP test determine and how?

2,4-Dinitrophenylhydrazine can be used for the qualitative identification of ketone or aldehyde functional group carbonyl functionality. A successful test is indicated by the formation of a precipitate yellow, orange, or red known as dinitrophenylhydrazone.

What is Brady’s reagent?

The chemical compound C6H3(NO2)2NHNH2 is 2,4-Dinitrophenylhydrazine (DNPH, Brady’s reactive, Borche’s reagent). Dinitrophenylhydrazine is a solid whose colours can range from red to white. It is a synthetic hydrazine-derivative, which is mostly used for the qualitative research of aldehyde which is a ketone related carbonyl group.

Does alcohol react with Brady’s reagent?

Aldehydes and ketones react to yellow, orange, or reddish-orange precipitates with the 2,4-dinitrophenylhydrazine reagent, whereas alcohols do not react. This is a successful technique for checking for the existence of a drug or demonstrating its absence.

Why does glucose not give a 2/4 DNP test?

That’s because glucose doesn’t react with Schiff’s reagent & 2,4DNP reagent despite having an aldehydrated group. It forms either α-anomer after the internal cycling. There is no free aldehyde group present in these forms. Thus, it does not give an aldehyde group reaction.

Does esters result in a positive 2,4-DNP test?

No, 2,4 DNP is negative for functional groups containing carbonyls, such as amides, carboxylic acids, and esters.

What color is Brady’s reagent?

2,4-DNP abbreviation for 2,4-Dinitrophenylhydrazine is a compound with a benzene ring, a functional hydrazine group and two nitro groups.It is a red-orange solid. This solution is used to detect the presence of carbonyl group(-CO) in the organic compound.

When benzoic acid reacts with 2,4-DNP, does any precipitate form?

No, benzoic acids contain the -COOH group and exhibit the stability due to resonance which occurs when a lone pair of electrons on the O-atom interacts with the p orbital of the carbonyl carbon, resulting in increased molecule delocalisation. As a result, they do not react and provide any precipitation with it in order to protect the stability.
Test your Knowledge on 2 4 Dinitrophenylhydrazine
Q5