What is the addition of alkynes? 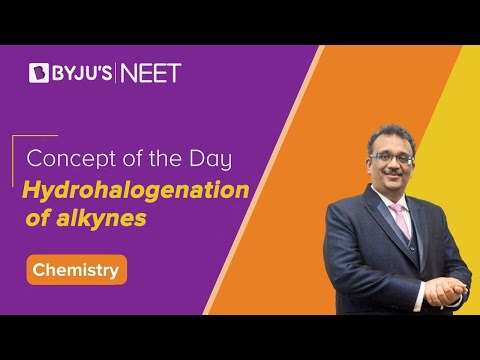 Addition of alkynes with halogens (halogenation)

Alkynes and halogens undergo addition reaction to form halogenated alkenes which further react with halogens to give halogen substituted alkanes. The reddish orange coloured solution of bromine and carbon tetrachloride gets decolorized as a result of the addition reaction. This is used as a test for unsaturation. Unlike the hydrogentaion reaction mentioned above, most halogenation reactions can be stopped in the intermediate stage by lowering the temperature below


Addition of alkynes with hydrogens (hydrogenation)

The catalyst that are involved in the case of rhodium, nickel, palladium, and platinum. Hydrogenation is a step-by-step process in which initially an alkene is formed. After which it undergoes further hydrogenation to form an alkane Lindlar catalyst is combined form of palladium which is coated with quinoline and absorbed on calcium carbonate.

Addition of alkynes with water (hydration)

Alkynes are immiscible in water. They do not react with water under normal conditions. Alkynes may react with water in the presence of dilute sulphuric acid and mercuric sulphate at a temperature of 333K. This results in the formation of carbonyl compounds. When hydrogen halide is treated with alkynes (triple bond compounds) it results in the formation of gem halides. Gem halides are the compounds in which two halogens are attached to the same carbon atoms in a molecule.

For more information on topics of chemistry and more, register with BYJU’S.

Why do alkynes show addition reactions ?

What is electrophilic addition reaction with example?

Electrophiles are the electron deficiency compound. In the alkyne there are one sigma bond and two pi bonds between two carbon atoms. These pi bonds are electron rich species; they form bonds with electrophile to form electrophilic addition reactions.
Example: halogenation, hydration reaction.

What is the use of addition reaction?

What is the difference between addition and elimination reactions?

How is hydration of alkyne done?

Alkynes are immiscible in water. They do not react with water under normal conditions. So in the presence of dilute sulphuric acid and mercuric sulphate catalyst alkynes react with water to form enols that spontaneously tautomerize to ketones.

Test your knowledge on addition reaction of alkynes!
Q5