What is a Lindlar Catalyst?

Lindlar catalysts are heterogeneous catalysts that are made up of palladium, calcium carbonate, and some catalyst poisons (such as quinoline or lead oxides). In order to obtain an alkene from an alkyne, a Lindlar catalyst can be employed to catalyze the hydrogenation of the alkyne (reaction of the alkyne with molecular hydrogen, H2). This Catalyst is named after its developer – the British chemist Herbert Lindlar.

Lindlar catalysts can be broken down into three primary components –

No specific structure can be attributed to these catalysts. An illustration detailing the composition of a Lindlar catalyst is provided below. 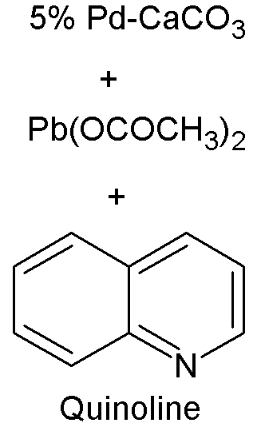 Although they are available for purchase commercially, Lindlar catalysts can also be prepared in laboratories via the reduction of palladium(II) chloride in semi-liquid calcium carbonate and the subsequent poisoning of the resulting mixture with a suitable catalyst poison. Common choices include lead acetate, lead(II) oxide, and quinoline.

In palladium-catalyzed hydrogenations of alkynes, the Lindlar catalyst facilitates the addition of hydrogen to the alkyne to afford the corresponding alkene. When this catalyst is used, the addition of the hydrogen substituent always proceeds via syn addition (addition of the substituent on the same side of the bond). Therefore, the final product is purely made up of the cis-isomer of the alkene (illustrated below).

An example of the syn addition favoured catalytic action of the Lindlar catalyst can be observed in the hydrogenation of butyne-dioic acid (acetylene dicarboxylic acid), which only yields maleic acid and does not yield any fumaric acid.

Why are Lindlar Catalysts ‘Poisoned’ with Lead Salts and Quinoline?

The catalytic activities of typical palladium catalysts are high enough to reduce even double bonds. The hydrogenation of alkynes with such catalysts can result in the formation of alkanes (the alkene products undergo further hydrogenation under the influence of the catalyst). In order to obtain only alkenes as the product, the catalyst must be poisoned with substances that reduce its activity.

The poisoned Lindlar catalyst does not have the ability to reduce double bonds. Therefore, the use of this catalyst in the hydrogenation of alkynes does not involve the formation of alkanes.

Several sources suggest that the lead present in the Lindlar catalyst reduce the absorption of dihydrogen. The formation of unwanted byproducts is controlled by quinoline.

What are the Uses of Lindlar Catalysts?

Can Lindlar Catalysts be Classified as Homogeneous Catalysts?

To learn more about Lindlar catalysts and other related concepts in organic chemistry, register with BYJU’S and download the mobile application on your smartphone.