Preparation And Properties Of Ammonia And Nitric Acid

Ammonia is one of the most extensively made chemicals in the United States of America. It is one of the most common hydrides present in the atmosphere. The ammonia found in the atmosphere is formed mainly due to the decomposition of bacteria which is released from the nitrogenous elements from animals and plants. The IUPAC name of ammonia is azane. The chemical formula of ammonia is NH3. There are various Properties of Ammonia.

Small quantities of azane/ammonia are present in soil and air due to the decay of organic matter which are nitrogenous in nature.

For small scale production ammonium salts are made to react with caustic soda to obtain ammonia: 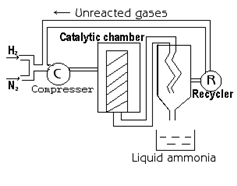 The Properties Of Ammonia are given as follows-

Friedrich Wilhelm Ostwald at the start of 20th century developed a process in which ammonia was used to obtain nitric acid. Due to the development of nitric acid, it helped the Germans during the World War Ito make explosives without importing it from other countries like Chile. Chemical formula of nitric acid is HNO3.

In this process, NH3 undergoes catalytic oxidation by oxygen which is present in the atmosphere in the presence of Pt/Rh as a catalyst at 500 K and a pressure of 9 bars.

Nitric oxide which is obtained is then made to react with oxygen to form NO2.

NO2 formed is dissolved in H2O to form HNO3

For more information You may Visit : Uses of Nitric Acid

What does ammonia do to the human body?

Is ammonia flammable or explosive?

Ammonia is not highly flammable, but containers of ammonia may explode when exposed to high heat.

What are the uses of ammonia?

Ammonia in its aqueous state are used as a refrigerant.It is used in the manufacturing of Urea. Urea is an excellent fertilizer of nitrogen. It can be used to remove grease due to its cleansing properties.

Exposure to nitric acid can cause irritation to the eyes, skin, and mucous membrane; it can also cause delayed pulmonary edema, pneumonitis, bronchitis, and dental erosion. Nitric acid is highly corrosive.

Most plastics are resistant to dilute nitric acid