Physical And Chemical Properties Of Ether

Ether is an organic compound containing an oxygen atom bonded to two same or different alkyl or aryl groups. The general formula for ethers can be R-O-R, R-O-Ar or Ar-O-Ar, where R represents an alkyl group and Ar represents an aryl group.

Some physical and chemical properties of ethers are discussed below:

Ethers are generally very unreactive in nature. When an excess of hydrogen halide is added to the ether, cleavage of C-O bond takes place leading to the formation of alkyl halides. The order of reactivity is given as HI>HBr>HCl

Aromatic ethers undergo halogenation, for example, bromination, upon the addition of halogen in the presence or absence of a catalyst. 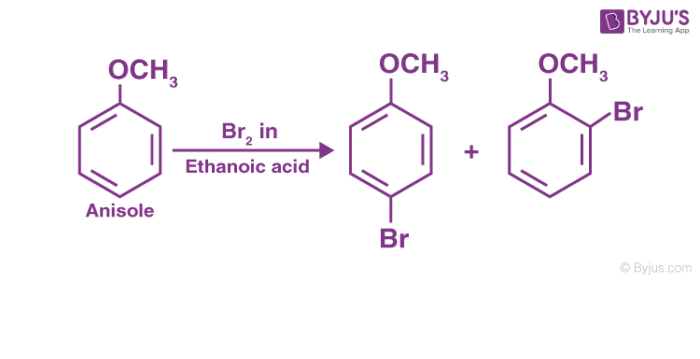 Aromatic ethers undergo Friedel Craft’s reaction for example addition of alkyl or acyl group upon the reaction with alkyl or acyl halide in the presence of a Lewis acid as catalyst.

To learn more about physical and chemical properties of ethers download BYJU’S – The Learning App.