What are Amphoteric Oxides? 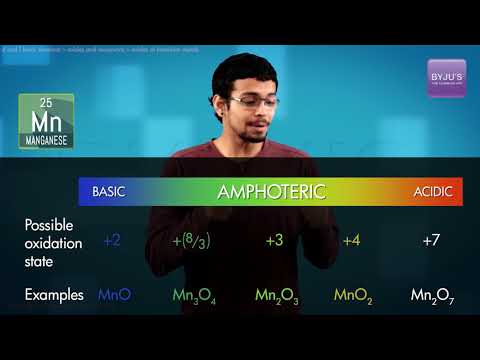 How to Identify Amphoteric Oxides?

Oxides are compounds of metals or nonmetals with oxygen. There are four types of oxide. Amphoteric oxides are classified as metal oxides that react with both acids as well as bases to create salts and water. Amphoteric oxides, among many others, include lead oxide and zinc oxide. Examples include amino acids and proteins that have classes of amine and carboxylic acids and molecules that can be self-ionized, such as water.

Amphoteric oxides are oxygen compounds that show both acidic and basic characteristics. These oxides undergo a neutralisation reaction to form water and salt as they react with acid. This demonstrates the essential properties of the compounds. Similarly, the alkali reacts to the formation of salt and water, demonstrating an acidic property. Example: oxide of aluminium.

All of the oxides can be made by heating the element in oxygen. Reaction of aqueous solutions of the metal trihalides with hydroxide gives the oxides in hydrated form. Going down the group, there is a transition from acidic oxides, through amphoteric to basic owing to increasing metallic character of the elements concerned.

Oxides of the Group 13 elements

The word amphoteric means both of them acid and base. Amphoteric oxides have both acidic and basic properties. The oxides of aluminium and zinc are examples. They form salts when they react with acids. They also react with alkalis to form complex salts.

The zincates and aluminates have the ending -ate to show that their ions are compound ions containing oxygen – rather like sulfates, carbonates and nitrates, indicating ions are ZnO22- and aluminate ions are AlO2–. Ions are written as Zn(OH)42- and Al(OH)4–. Note that sodium zincate and aluminate are soluble in water.

The most basic oxides are found near the bottom of Groups I and II. Basicity tends to increase down a periodic group. Thus for Group V the acidity of the oxides are NO2(acidic), P2O3(acidic), As2O3(amphoteric). Sb2O3(amphoteric), Bi2O3 (basic).

In the main groups of elements, basicity of oxides increases with increase in atomic number down the group, eg. BeO < MgO < CaO < SrO < BaO, though the trend is reversed in later transition elements groups.

How do you identify amphoteric oxides?

How are amphoteric oxides formed?

Give some examples for amphoteric oxides.

Amphoteric oxides are classified as metal oxides that react with both acids as well as bases to create salts and water. Amphoteric oxides, among many others, include lead oxide and zinc oxide. Amphiprotic molecules, which can either donate or accept a proton (H+), are one sort of amphoteric species.

Which is more basic in nature?

The basic existence of amines relies on the supply of a single nitrogen pair for donation. The electron releasing group such as -CH3 increases the amine basicity by increasing the density of electrons over nitrogen, which promotes the donation of lone electron pairs. (CH3)2NH is then the most simple.

Are basic oxides soluble in water?

In water, basic oxides are normally insoluble. Many that dissolve form alkaline solutions in water.

Which element reacts with oxygen to form a basic solution?

For alkali metals, oxygen is very reactive. The alkali name is given to alkali metals because the oxides of these metals react to form a simple or alkaline metal hydroxide with water. Lithium produces oxide, sodium produces peroxide, and superoxide is formed by potassium, cesium, and rubidium.