Column chromatography is the most basic and widely used separation and purification technique. Column chromatography can separate and purify both solid and liquid samples. A stationary solid phase adsorbs and separates the compounds passing through it with the help of a liquid mobile phase in column chromatography. Compounds are adsorbed based on their chemical nature, and elution is based on differential adsorption of a substance by the adsorbent.

Q-2: What are the two different types of solvent systems used in column chromatography?

Isocratic:. In an isocratic system, only one solvent passes through the stationary phase,

Gradient: In a gradient system,two solvents in predetermined ratios pass through the stationary phase to separate the components.

Q-3: The process of elution is based on the

Answer: c) Differential adsorption of a substance by the adsorbent

Q-4: What is the retardation factor? How it is calculated?

It can be calculated using the formula below:

The value of Rf is always less than 1.

Q-6: Chromatography is a

Explanation: Chromatography is a laboratory technique for separating a mixture by passing it through a medium in which the mixture’s components move at different rates and thus separate.

As we can see, no chemical reactions are taking place; instead, their separation is caused by differences in rates and mobility. As a result, a physical process.

Q-7: Which physical property is used in column chromatography?

Explanation: The speed of the various constituents of the mixture is the most important factor influencing the column chromatography technique. This speed is determined by the amount of time the constituents spent in the solvent. If they are drawn to the stationary phase, they move slowly out. They will move out faster if they are highly soluble in the mobile phase.

Hence it can be concluded that,

The greater the attraction to the stationary phase, the slower the movement of the desired particles. This is referred to as adsorption.The higher the constituent solubility in the mobile phase, the faster the mobility rate and elution.

Q-8: How will you account for the Rf value always being less than one?

Answer: Rf value is always less than 1 can be understood by taking the following example:

If the substance moves, it can only move in the direction of the solvent flow and cannot move faster than the solvent. If a specific substance in an unknown mixture travels 3 cm and the solvent front(mobile phase) travels 6 cm, the retardation factor is 0.5.

Q-9: Which of the following is not a type of column chromatography?

Answer: The three uses of Column chromatography are:

1. It is the most effective technique for separating plant extracts into their constituents in pure form.

2. It is used to separate drugs from the blood, colours from the dye etc.

Q-11: What do you mean by wet loading in column chromatography?

Answer: Column chromatography requires a series of steps to be completed. The loading of the column is the most important consideration here.

In chromatography, loading refers to the amount of substance introduced into a column.

Wet loading involves directly placing a liquid sample onto the top of the column with a pipet and allowing it to seep through the top of the sorbent bed.

Q-12: The Rf values of X and Y in a mixture determined by TLC in a solvent are 0.75 and 0.52, respectively. Which of the two compounds, X or Y, will be adsorbed at the top if the mixture is separated by column chromatography with the same solvent mixture as a mobile phase? Explain.

This shows that Y will be found to be adsorbed at the top as it has less Rf value than X.

Q-13: Which substances elute first? Is it polar or nonpolar?

Q-14: Eluting power is related to the

Explanation: A solvent’s eluting power is largely a measure of how well it can pull an analyte off the sorbents to which it is attached.

The polarity of a solvent, the polarity of the stationary phase, and the nature of the sample components all influence its elution power.

Answer: A chromatogram is a visible record (such as a graph) demonstrating the outcome of separating the components of a mixture using chromatography.

Q-2: Which of the following cannot be used as the adsorbent material in column chromatography?

Q-3: The column chromatography elutes two compounds, A and B. (adsorption of B>A).

Which of the following is the correct statement?

Q-4: Complete separation occurs in column chromatography depending on the degree of adsorption.Three coloured bands l, m, and n are formed in the given column. 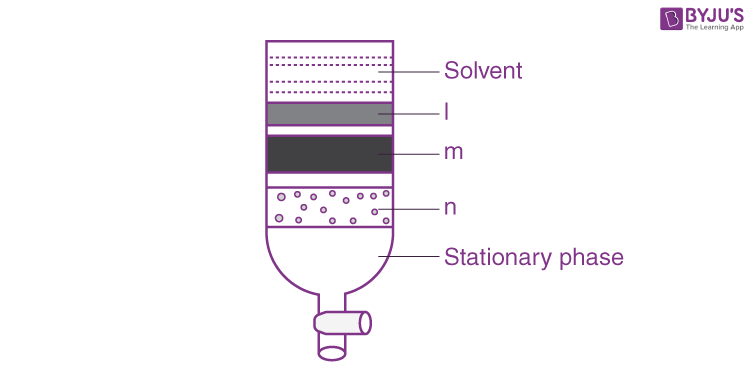 Q-5: How is elution time different from elution volume?