What is Critical Temperature? 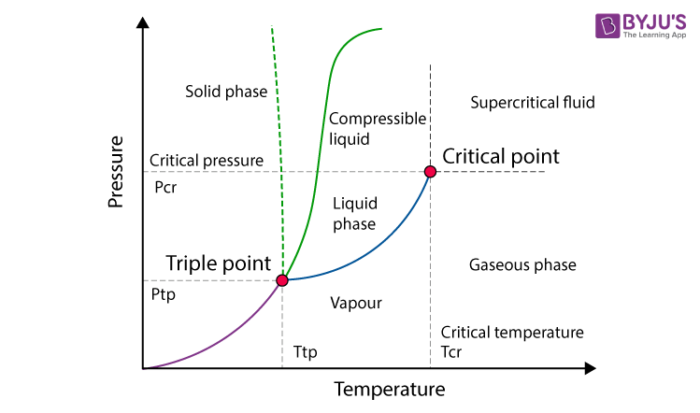 The critical point of a liquid was discovered by the French physicist Charles Cagniard de la Tour in the year 1822. He observed that carbon dioxide could be liquified at a temperature of 31oC when 73 atm of pressure was applied, but it could not be liquified at higher temperatures, even when pressures above 3000 atm were applied. This maximum temperature at which substances could exist in the liquid phase was later named “Critical Temperature” by Dmitri Mendeleev in the year 1860.

Critical Temperatures and Pressures of Some Substances

From the table provided above, it can be observed that metals generally have very high Tc and Pc values. On the other hand, helium has one of the lowest critical temperatures (valued at 5.19K). To learn more about critical pressure and temperature, register with BYJU’S and download the mobile application on your smartphone.

What is Critical Pressure?

What is the Difference between Triple Point and Critical Point?

In thermodynamics, what is meant by the term ‘critical point’?

In the field of thermodynamics, the term ‘critical point’ or ‘critical state’ is used to denote the endpoint of a phase equilibrium curve. For example, the critical point between the liquid phase and the vapour phase defines the conditions under which a liquid substance can coexist with its vapour. At a high enough temperature point (above the critical temperature), a given gas cannot be liquefied by simply applying pressure to it.

What is the importance of critical temperature?