Difference between Allotropes and Isomers

While studying Chemistry, most students encounter with terms like Isomers and Allotropes. Although both of these terms do sound similar, they are different than each other in nature. 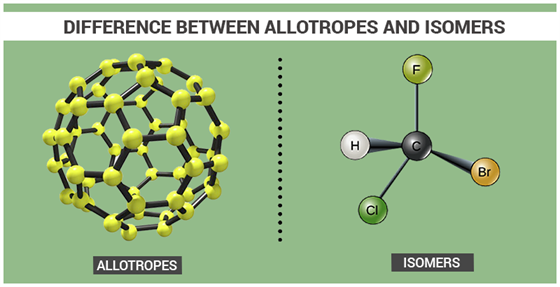 Allotropes are defined as the structural modifications of an element, that is, they are different forms of the same element. This happens due to the different bonding of the atoms which are arranged in sequence, thus forming a new structure. These structures possess different chemical and physical properties. Examples of allotropes would include graphite and diamond.

In general, Allotropes occur in certain elements of the Group 13, 14, 15 and 16 of the Periodic Table. It should be noted that Allotropism of elements can occur only within the same phase (solid, liquid or gas forms) and thus cannot interchange or transfer to another state or phase. There are few elements for which the allotropes have different molecular formulas. For example, allotropism of oxygen molecules like dioxide O2 and ozone O3. They both can exist in all the three states i.e solid, liquid and gas.

Isomers are the chemical compounds that have a similar molecular formula but with different structural formulae. Therefore, although these isomers have different atomic arrangements, yet they have the same number of atoms. Isomers do not share any common properties unless their functional group is similar, for examples 2-methylpropan-1-ol and 2-methylpropan-2-ol.

There are two main types of Isomers:

The Difference between Allotropes and Isomers is given below:

The above points would have provided the information on how Allotropes and Isomers differ in characteristics. To read further interesting articles, stay tuned with BYJU’S.

Test your knowledge on difference between allotropes and isomers!
Q5