Glutamine has a molecular formula C5H10N2O3 and is abbreviated as ‘Gln’ or even as ‘Q’. This amino acid is one among the twenty amino acids which are needed by human beings and animals to function properly. This element is said to be vital in the synthesis of protein, donation of carbon and nitrogen and for the cellular energy as well as for the functioning of the kidney. The glutamine structure is what makes it a special kind of amino acid.

This amino acid plays a vital role when related to stress. The stress which is caused by trauma, burns, excessive exercise and the various diseases like cancer very often result in the glutamine deficiency. It provides a number of important functions and also develops supplements helping the body to recover from the stress.

The structure of Glutamine is as shown in the figure below. 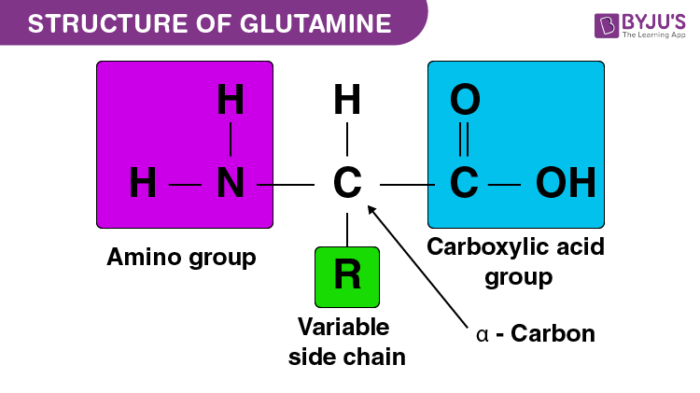 The side chain of this glutamine is known as a simple amide or amino group – NH2. It is located in the end region of the R-group. It consists of other group called the carboxylic group on the other end of the carbon atom. Glutamine is usually a linear molecule which behaves as a polar molecule having positive and negative charges. The amino acid is considered to be water-loving as it is polar in nature.

Glutamine consists of other 2-molecules named glutamate and ammonia with the use of an enzyme called as glutamine synthetase. This is mostly done in the muscles and sometimes in the lungs, brain tissues and the liver.

The human body synthesizes more amount of glutamine which is further involved in numerous biochemical processes of life. It involves the metabolic process occurring in the kidney and the liver, etc. Some of the functions and glutamine uses are as follows.

Write the molecular formula of glutamine.

Glutamine has a molecular formula C5H10N2O3 and is abbreviated as ‘Gln’ or even as ‘Q’.

What are the uses of glutamine?

Give examples of essential amino acids.

Why are amino acids called amphoteric?

Amino acids have both acidic and basic properties. This is why they are amphoteric. The predominant form of the amino acid is based on the pH of the solution.

Take up a quiz on Glutamine
Q5