When many monosaccharide units are joined together by a glycosidic linkage then polysaccharides are formed. These are commonly found in nature. They also act as food storage or structural materials.

First, let us discuss starch from where we will move on to other polysaccharides such as Glycogen and Cellulose.

It is one of the most important dietary sources for human beings and is also one of the main storage polysaccharides of plants. We can find the high content of starch in cereals, roots and also in some other vegetables. It is a polymer of α-glucose and it mainly contains two components- Amylose and Amylopectin. Of these, Amylose is soluble in water and contains around 15-20% of starch. Chemically we can say that Amylose is a long unbranched chain with α-D+ glucose units which are around 200-1000 in number and are connected by C1-C4 glycosidic linkage. The starch content in Amylopectin is about 80-85%, but this is not soluble in water. It is a branched-chain polymer and is formed by C1-C4 linkage by C1-C6 glycosidic linkage the branching starts. 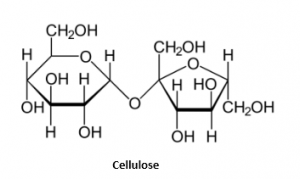 In an animal’s body, the carbohydrates are stored in the form of glycogen. This is also called animal starch as its structure is somewhat similar to amylopectin and it has many branches. It is present in the liver, muscles as well as in the brain. The enzymes break down the glycogen into glucose whenever the body needs it. We can also find glycogen in yeast and fungi. For any other information contact our BYJU’S mentors who are always there to help you.

Carbohydrates are a major source of food and an important form of energy for most living organisms. A carbohydrate is a biomolecule consisting of carbon, hydrogen, and oxygen atoms. The two basic compounds that makeup carbohydrates are – Aldehydes and Ketones.

Polysaccharides are major classes of biomolecules. They are long chains of carbohydrate molecules, composed of several smaller monosaccharides. These complex bio-macromolecules functions as an important source of energy in animal cell and form a structural component of a plant cell.

It is one of the most important dietary sources for human beings and is also one of the main storage polysaccharides of plants.

The two uses of starch are;
Bakery Products require starch for their elasticity, its examples would be cake and biscuit fillings.
In industries, starch is used to increase the mechanical strength to resistance to friction and resist moisture penetration.
Test your knowledge on Importance Of Polysaccharides
Q5