The Kjeldahl method first came into existence in 1883 and was developed by a Danish chemist named Johan Kjeldahl. This method was specifically developed for determining the nitrogen contents in organic and inorganic substances.

In today’s world, Kjeldahl nitrogen determinations are used on several samples like wastewater, soil, fertilizers, meat, feed, grain, and many other substances. The method is also used for estimating the protein content in foods.

The Kjeldahl method was first conducted using stone fume hoods and gas mantles. A few years down the line, macro-Kjeldahl digestion, as well as distillation instrument, was developed and used. The setup consisted of Kjeldahl flasks also. There is a miniature version of the setup known as micro-Kjeldahl equipment which consists of smaller sized units. 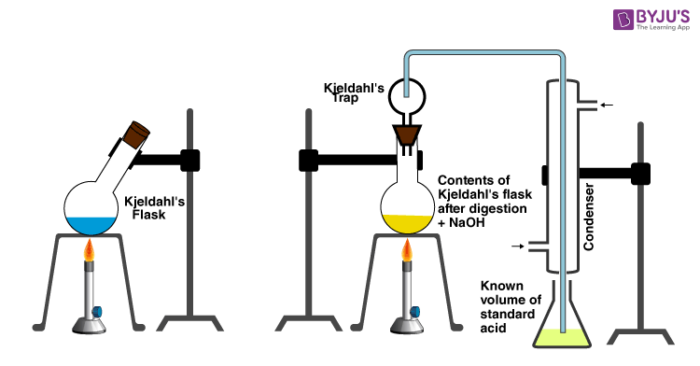 In recent years, the equipment has further gone some significant changes and aluminum or ceramic heating blocks are used. This setup can even accept several straight digestion tubes at once. In addition, “Block digesters” are used alongside benchtop distillation units with steam generators in-order to decrease the distillation time. The equipment is mostly made of corrosion-resistant materials.

Since the development of Kjeldahl method about 100 years ago the technique and apparatus have been modified and made better. However, even with the new changes the basic principles introduced by Johan Kjeldahl is still relevant. The main objective or purpose of this procedure is the oxidation of organic compounds using concentrated sulphuric acid.

Overall, the Kjeldahl method is divided into three main steps. The method has to be carried out in proper sequence. The steps include digestion, distillation, and titration.

1. Digestion: In this method, a certain substance or sample is heated in the presence of sulphuric acid. The acid breaks down the organic substance via oxidation and reduced nitrogen in the form of ammonium sulphate is liberated. Potassium sulphate is usually added to increase the boiling point of the medium. Catalysts like mercury, selenium, copper, or ions of mercury or copper are also used in the digestion process. The sample is fully decomposed when we obtain a clear and colourless solution.

2. Distillation: The distillation of the solution now takes place and a small quantity of sodium hydroxide is added to convert the ammonium salt to ammonia. The distilled vapors are then trapped in a special trapping solution of HCl (hydrochloric acid) and water.

3. Titration: The amount of ammonia or the amount of nitrogen present in the sample is then determined by back titration. As the ammonia dissolves in the acid trapping solution some HCl is neutralized. The acid that is left behind can be back titrated with a standard solution of a base such as NaOH or other bases.

The percentage of nitrogen can be determined using the given formula:

While the Kjeldahl method of nitrogen analysis has become the worldwide standard, this method is not suitable for compounds containing nitrogen in azo and nitro groups or in rings (quinoline, pyridine, etc.). In these cases, the nitrogen cannot be converted to ammonium sulphate by following the Kjeldahl method.

Kjeldahl’s method and its Limitations 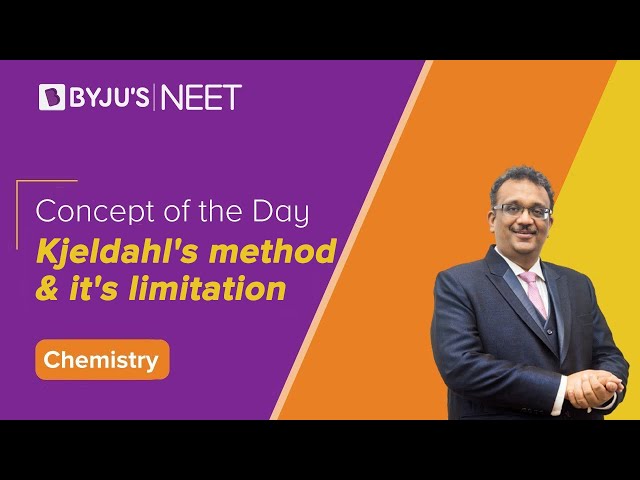