Lactones are cyclic organic esters of hydroxycarboxylic acids, usually formed by the reaction of a halogen atom or hydroxyl group with a carboxylic acid group present in the same molecule. These are formed by intramolecular esterification of respective hydroxycarboxylic acids. It has a ring of two or more carbon atoms and one oxygen atom. Lactones with three or four-membered rings are highly reactive which makes it very difficult to isolate them. 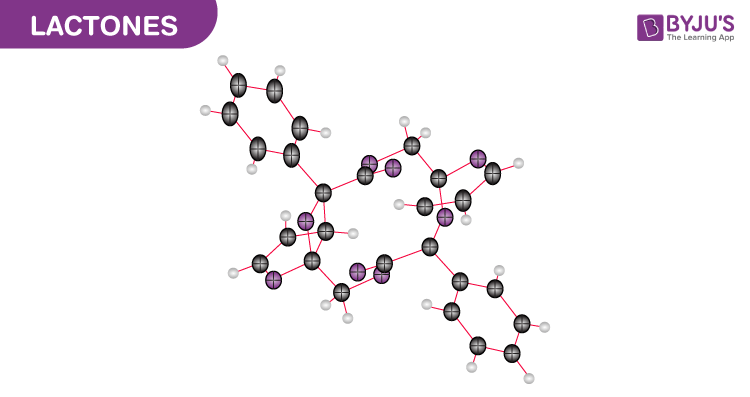 Name of lactone is derived from a compound called Lactide; that is generated by the dehydration of lactic acid. These are named with a Greek letter prefix and lactone suffix. Prefixes indicate the size of the lactone ring.

Many methods adopted for ester synthesis can be applied for Lactone synthesis. Methods include Shiina macro-lactonization, nucleophilic abstraction and Yamaguchi esterification. Lactones like γ-nonalactone,γ-octalactone, γ-undecalactone, γ-decalactone can be synthesised in a single step process.

When a lactone along with a base (Sodium hydroxide) is heated, it hydrolyses into its parent compound. Lactone’s hydrolysis condensation reaction is a reversible reaction with equilibrium.

Lithium aluminium hydride reduces lactones to diols. The reaction involves the breaking of the ester bond and then the carboxylic acid group is reduced to the alcohol group.

Polyesters are formed by lactones.

Alcohol and amide are formed when lactones react with ethanolic ammonia.

Lactones play a vital role in providing flavour to  fruit and dairy products. Therefore, these are used as flavour and fragrances. Some lactones with their flavour are listed below.

Test your Knowledge on Lactones!
Q5