Q-1: With the help of an appropriate example, write the steps of the Markovnikov rule mechanism.

H+, an electrophile produced by hydrogen bromide, attacks the double bond of propene to form a carbocation, as shown below: 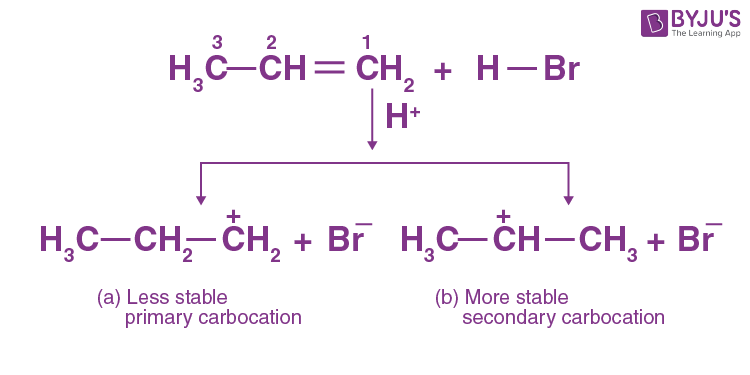 The carbocation (b) is attacked by Br– ion, resulting in the following product:

Q-2: State a rule that is the opposite of the Markovnikov rule.

Answer: When a polar molecule is introduced to an unsymmetrical alkene in the presence of organic peroxide, the negative part of the molecule is attached to the carbon atom that is coupled to more Hydrogen atoms than the other unsaturated carbon atom. This reaction is known as the peroxide or Kharash effect, or the anti-Markovnikov rule addition reaction.

Q-3: The Markovnikov rule is not followed in

Explanation: The ultimate product of treating alkenes with borane (BH3) in the presence of hydrogen peroxide or sodium hydroxide is an alcohol. The boron atom acts as an electrophile in this electrophilic addition process.The boron atom is mostly placed on the carbon which is less substituted. Therefore, it can be classified as an anti-Markovnikov reaction.

Q-4: Will the Markovnikov rule apply when adding HBr to a symmetrical alkene?

For example: Addition of HBr to ethene takes place as:

Because the system is symmetrical, there is no olefin carbon that can be classified as having fewer or more H-atoms.

Q-5: Write IUPAC name of the product obtained by addition reactions of HBr to pent-1-ene in the absence of peroxide.

Answer: The reaction follows the Markovnikov Rule in the absence of peroxide.

The IUPAC name of the product is 2-Bromopentane.

Q-7: When a hydrogen halide(HX) is introduced to an unsymmetrical alkene, an intermediate is

Explanation: The production of carbocation occurs when HX is added to an unsymmetrical alkene according to the Markovnikov rule. The product is generated after the nucleophile attacks the created carbocation.

Q-8: When two acid (H-X) equivalents are added to an aliphatic alkyne, what product is produced?(X= Cl, Br, I)

One equivalent of an acid gives the alkenyl halide (vinyl halide)

The reaction illustration is shown below:

Q-9: What is the hybridisation of the following carbocation?

Explanation: Because the positive-charged carbon forms three sigma bonds, this is an example of sp2 hybridisation.

The stability of the carbocation produced determines the reactivity of alkenes towards HBr.

As a result, isobutene is the most reactive towards HBr, whereas ethene is the least reactive.

Q-11: Reaction which will give fastest carbocation 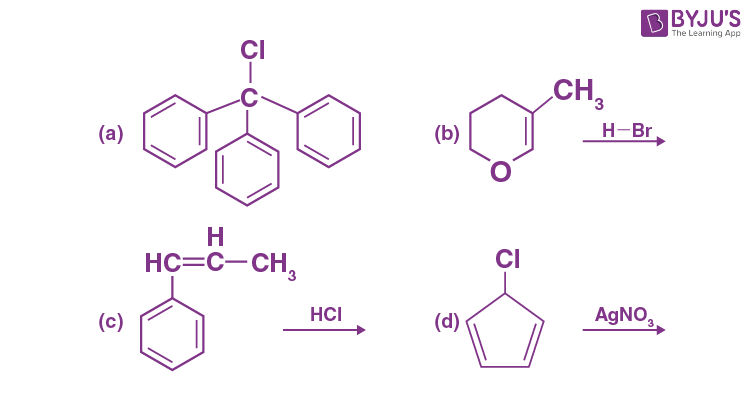 In a) carbocation is formed by removal of chlorine and is resonance stabilised.

In b) the carbocation formed is mesomerically stabilised (lone pair donation of oxygen).

In c), proton released from HCl attacks the double bond and forms carbocation which is again resonance stabilised.

Thus, reaction b) will give the fastest carbocation.

Q-12: What will be the primary product if the following reaction follows the Markovnikov rule?

Explanation: According to Markovnikov, the acid’s negative component (Br–) adds to the more substituted olefinic carbon. As a result, product (a) is a major product.

Explanation: The halide component is added to the carbon in the product, which is less substituted. It is an anti markovnikov product.

Q-14: How do you explain the product like the one shown in the below reaction?

Answer: HCl will simply join its hydrogen to the olefin carbon with the greatest hydrogens and chlorine to the carbon with less hydrogen, according to markovnikov rule. But here, chlorine is added to the carbon other than olefinic.This is because of the rearrangement of the carbocation formed.

The methyl shift takes place which results in a more stable tertiary carbocation.

Q-15: What is the order of reactivity of hydrogen halides with alkenes?

Answer: Due to a decrease in bond (HX) dissociation energy, the stability of hydrogen halides diminishes along the group. The reactivity order is

Q1: How does Markovnikov’s rule show that electrophilic addition reactions to alkenes are regioselective?

Q-2: Markovnikov reaction is a

Q-3: In the hydration of alkene, the rate determining step is

Q-5: Addition of HCl to propyne leads to