Most of the time the substances that we see around us are not in their pure form. They are basically a mixture of two or more substances. Interestingly, mixtures tend to also come in different forms. Therefore, there are several types of separation techniques that are used in segregating a mixture of substances. As for the need for separation, it is usually done to remove all the unwanted materials and obtain useful components.

Some of the common methods of separating substances or mixtures are:

Let us discuss them in detail below.

This method is mostly done during the harvesting of crops. Normally, the stalks of the wheat are dried once it is harvested. The grain is then separated from the stalks and grounded into the floor by beating the dry stalks to shake off the dried grains.

When the grains are collected from the process of threshing, it needs to be cleared out of husks and chaffs before it is turned into flour. Normally the separation of the mixture is carried out with the help of wind or blowing air. The husk and chaff are blown away by the strong wind when the farmers drop the mixture from a certain height to the ground. The heavier grains are collected at one place.

It is done to separate mixtures that contain substances mostly of different sizes. The mixture is passed through the pores of the sieve. All the smaller substances pass through easily while the bigger components of the mixture are retained.

Evaporation is a technique that is used in separating a mixture, usually a solution of a solvent and a soluble solid. In this method, the solution is heated until the organic solvent evaporates where it turns into a gas and mostly leaves behind the solid residue. 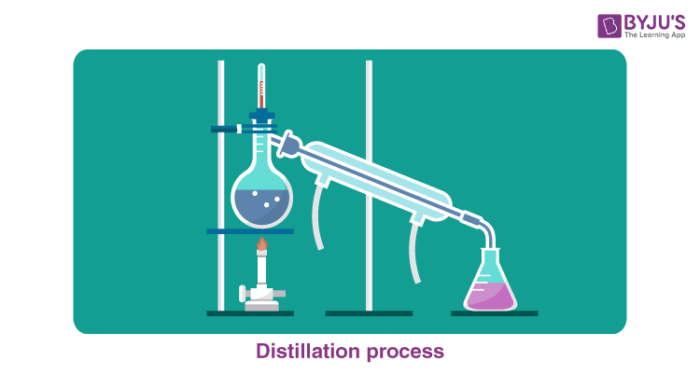 When mixtures consist of two or more pure liquids than distillation is used. Here the components of a liquid mixture are vaporized, condensed and then isolated. The mixture is heated and the component which is volatile evaporates first. The vapour moves through a condenser and is collected in a liquid state.

The most common method of separating a liquid from an insoluble solid is the filtration. Take, for example, the mixture of sand and water. Filtration is used here to remove solid particles from the liquid. Various filtering agents are normally used like filtering paper or other materials. 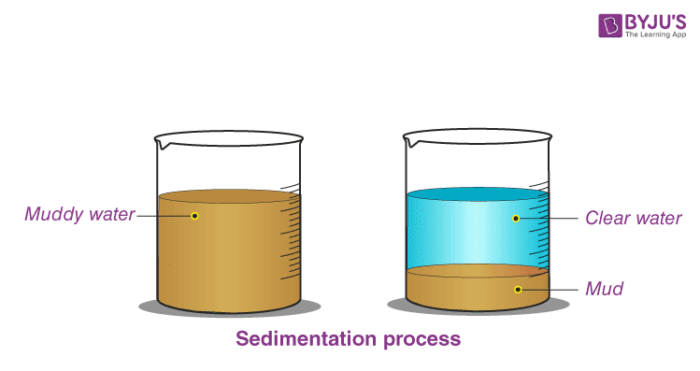 Sedimentation is a process by which heavier impurities present in liquid normally water settle down at the bottom of the container containing the mixture. The process takes some amount of time.

Separating funnel is used mainly to segregate two immiscible liquids. The mechanism involves taking advantage of the unequal density of the particles in the mixture. Oil and water can be easily separated using this technique.

When one substance in the mixture has some magnetic properties then this method is quite useful. Strong magnets are commonly used to separate magnetic elements.

What are chemical methods of separation?

Distillation, crystallisation, adsorption, membrane procedures, absorption and stripping, and oxidation are the typical chemical engineering methods of isolation and purification.

How can you separate sand and salt?

It either remains in the bath as sand is applied to the bath or forms a film on the bottom of the bottle. Consequently, sand does not dissolve in water and is insoluble. Through separating the mixture, it is easy to segregate sand and water. Salt by evaporation may be isolated from a solution.

What are two types of mixtures?

Is Coca Cola a mixture?

Can homogeneous mixtures be separated?

Components in homogeneous mixtures “can typically be distinguished by taking account of the varying properties of the different components.” A mixture can be heated “until the component that boils at the lowest temperature becomes a vapour and can be distinguished” during the distillation process.

For more content on similar topics, register with BYJU’S.

Test your Knowledge on Methods of separation!
Q5