What is the Ninhydrin Test?

The ninhydrin test is a chemical test which is used to check whether a given analyte contains amines or α-amino acids. In this test, ninhydrin (a chemical compound with the formula C9H6O4; IUPAC name: 2,2-dihydroxyindane-1,3-dione) is added to a test solution of the analyte. The development of a deep blue colour indicates the presence of ammonia, primary/secondary amines, or amino acids in the analyte.

The chemical reaction that generally occurs in a positive ninhydrin test is illustrated below.

The amino group of the analyte forms a compound similar to diketohydrin. This compound has a deep blue colour, often referred to as Ruhemann’s purple.

Now, the ammonia goes on to react with another ninhydrin molecule to form diketohydrin (which is also known as Ruhemann’s complex). This complex is responsible for the deep blue colour. When the analyte contains Imino-acids like proline, a yellow coloured complex is formed. When asparagine is used, the colour of the resulting complex is brown. 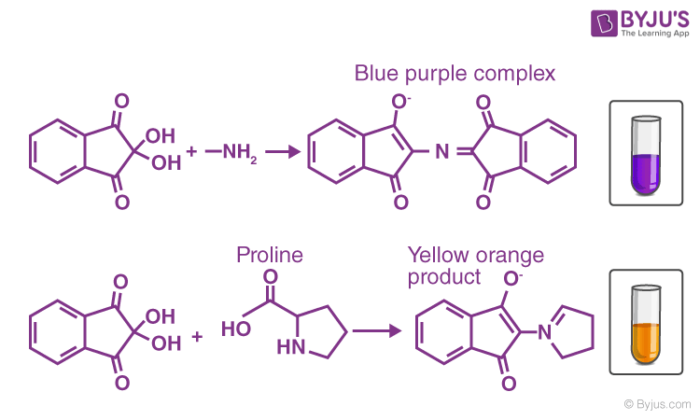 An image detailing coloured solutions obtained in positive ninhydrin tests is provided above.

Mention the limitations of the ninhydrin test.

The fact that ninhydrin reacts not only with (α + ɛ) amino groups but also with ammonia nitrogen and other free amines is one of the test’s limitations. Furthermore, soil residues contaminate archaeological and historic protein fibres, which are difficult to remove and affect test results.

Which amino acid does not react with ninhydrin?

Ninhydrin is utilised in protein amino acid analyses. Except for proline, most amino acids are hydrolyzed and react with ninhydrin.

Which colour is developed in ninhydrin test?

The reaction of ninhydrin with an amino acid results in the creation of Ruhemann’s purple, a dark purple compound.

Why is ninhydrin used for fingerprints?

Ninhydrin is a chemical powder which is soluble in ethanol or acetone at room temperature. When a ninhydrin solution is sprayed over fingerprints (typically using a simple spray bottle), the ninhydrin reacts with the amino acids in the fingerprint residue.

What is the purpose of ninhydrin reagent?

Ninhydrin is a tricyclic 1,2,3-trione that acts as a reagent for amino acids. It’s an organic chemical component that reveals hidden fingerprints on porous surfaces like paper, cardboard, and bare wood. Ninhydrin is a chemical that can be used to detect both primary and secondary amines.

To learn more about the ninhydrin test and other important chemical tests (such as the biuret test), register with BYJU’S and download the mobile application on your smartphone.