Q1: Which of the following reactions is a precipitation reaction?

Explanation: For a reaction to be a precipitation reaction, one of the products must be in a solid state.

Q2. The clear liquid remaining after the solid precipitate settles down is called ______.

Explanation: In a precipitation reaction, the newly formed solid mass settles down and the rest of the liquid appears clear and can be separated by transferring into another beaker. There is no need for filtration of this liquid. While a mother liquor is the liquid left after filtration of a solution.

Q3. During the drilling of an oil well, which product is extracted first?

Q4. Which process is used to separate out different hydrocarbon compounds from Precipitation Reactions?

Explanation: Fractional Distillation is a method of separating a mixture of liquids that have different boiling points.

Q5. Till what temperature is the crude Precipitation Reactions heated in the Fractional Distillation method to separate out the other hydrocarbon products found in it?

Q6. Write the complete and net ionic equations of the given molecular equation.

Answer: The given reaction is a precipitation reaction. The balanced molecular equation can be written into the complete ionic equation as:

The 2K+ (aq) and 2OH– (aq) cancel out each other and hence the net ionic equation is:

Q7. Out of the given equations, answer the following questions.

Answer: a. A physical change is when the identity or the intramolecular bonds in the reactants do not change. This change comprises the change in the physical state of the matter. In (i), water undergoes a change in its physical state from being a liquid to solid. During this change, the chemical compound water (H2O) does not change its chemical formula. Hence, (i) is the physical change.

Q8. What is the condition for a precipitation reaction to occur? How can this condition be achieved?

Answer: Precipitation takes place when two aqueous saturated solutions are mixed up. The precipitate forms when its concentration in the solution exceeds its solubility. This may happen due to change in temperature, loss of solvent by solvent evaporation, or just by mixing solvents. Precipitation reactions occur at a faster rate in a supersaturated solution.

Q9. Bromine is prepared by treating the bromide salts with chlorine. Write a chemical reaction for the same.

Answer: Bromide salt (brine) such as NaBr reacts with chlorine to release Br2 (l) as follows:

Q10. Which stage comes before precipitation?

Q11. What is a Walden reductor?

During the process, the reduction and precipitation reactions undergo simultaneously. The Walden reactor is used to obtain elements in their low-valence state or to obtain the compound in small amounts.

For example: the Walden reactor can be used to reduce UO22+ to U4-.

Q12. Why do some precipitates look coloured?

Answer: The colour is the property of metals incorporated in the salt. The colour appears as per the valency of the metal atom. Some common colours associated (but not obvious) with the fixed valence state of a metal are given hereunder.

Q13. Explain how the colour of the precipitate helps in the cation analysis?

Answer: The Precipitation reaction can be used to analyse the type and nature of the cation present within a given solution. This can be done by adding an alkali solution to the unknown salt solution; hence converting the cation (present in the salt) into its hydroxide. Therefore, the colour and solubility of the precipitate in excess of the solution is determined to carry out the cation analysis. This way the colour of the precipitate helps in the cation analysis.

Q14. Define the term “pellet” in reference to the precipitation reactions.

Q15. What is precipitate ageing?

Answer: Precipitate ageing or digestion occurs when the precipitate particles are left unseparated at a high temperature within the same solution. This results in the formation of bigger recrystallised particles. The process is termed as Ostwald ripening.

Q1. Identify the spectator ions in the given reaction.

Q2. What is a supersaturated liquid?

Q5. What is the principle of Precipitation reactions? 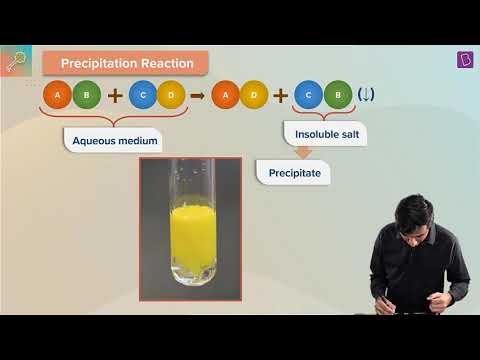