Preparation of Alkanes – Alkanes are referred to as saturated hydrocarbons, that is, hydrocarbons having all carbon atoms bonded to other carbon atoms or hydrogen atoms with sigma bonds only. As the alkanes possess weak Van Der Waals forces, the first four members, C1 to C4 are gases, C5 to C17 are liquids and those containing 18 carbon atoms or more are solids at 298 K. They are colourless and odourless. They are prepared in laboratories and industries through various techniques. Some techniques for the preparation of alkanes are:

Preparation of Alkanes from unsaturated hydrocarbon:

Alkane can be prepared from alkene and alkyne through the process of hydrogenation. In this process, dihydrogen gas is added to alkynes and alkenes in the presence of a catalyst. These catalysts are finely divided and may include nickel, palladium or platinum to form alkanes. With the help of nickel as the catalyst, this reaction takes place at an elevated temperature, whereas the reaction takes place at room temperature with platinum as the catalyst.

Preparation of Alkanes from alkyl halides:

Alkane can be produced from alkyl halides predominantly by two ways:

2. Wurtz reaction: In dry ethereal solution, on treating alkyl halides with sodium metal, the production of alkanes is higher. By this reaction, we can achieve higher alkanes with an even number of carbon atoms. 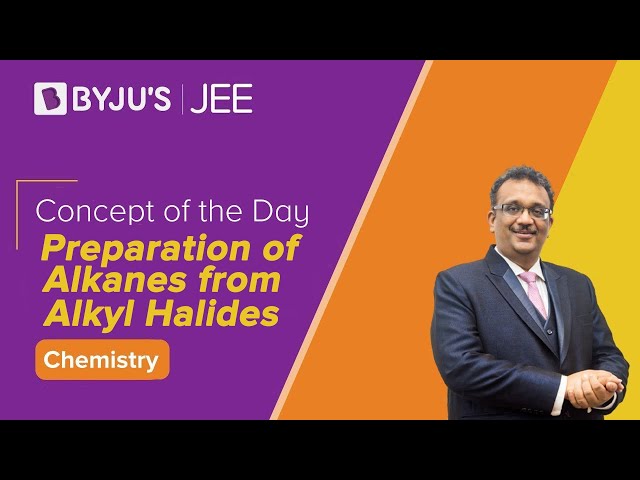 Preparation of alkanes from carboxylic acids:

1. Alkanes can be prepared from carboxylic acid via the removal of carbon dioxide. This process is known as decarboxylation. It produces alkane with a carbon atom lesser than that present in the carboxylic acid.

2. Kolbe’s electrolytic method: In this process, the alkane is produced through electrolysis of sodium or potassium salt of carboxylic acid.

To learn more about the preparation of alkanes, download BYJU’S – The Learning App.

Test Your Knowledge On Preparation Of Alkanes!
Q5