Sewage - Wastewater and its Management

Water is used for almost every activity. This water gets dirty during usage. Dirty water contains lather, mixed with oil, black and brown water that is drained down the showers, toilets, laundries, etc. Wastewater is also known as sewage. Water is an important resource and should not be wasted. Sewage treatment is done in order to obtain water for future uses. Clean water is a very basic need for all human beings. It is needed for drinking, cooking, washing and many other purposes. Population growth, pollution, industrial growth and mismanagement of resources has to lead to the scarcity of water. Water is necessary to sustain life on this planet. Sewage is actually the wastewater that is released from houses, hospitals, industries, offices and other sources. It also includes the rainwater that runs down the streets in a storm. The water that washes off the roads and rooftops contains many harmful substances. Sewage is the liquid waste. Wastewater has dissolved and suspended impurities in it. These impurities are known as contaminants.

The process of removing pollutants from water before it enters any water body or is reused is termed as cleaning of water. The process of wastewater treatment is commonly known as sewage treatment. There are many sewage management methods wherein each treatment method of sewage takes places in several steps. In domestic cases, one set of pipes carry clean water and the other set carries the used water. The network of pipes used for sewage treatment is known as sewers. It is basically a transport system that carries the sewage from the point it is produced to the point of disposal or treatment through Drainage Systems.

Wastewater is collected and passed through bar screens where plastic bags, sticks, cans, napkins, etc. are removed.  This water then enters a grit and a sand removal tank. The speed of the water is decreased so that the sand particles get settled at the bottom. After this, the water is allowed to settle in a large tank which is sloped towards the centre. Solid wastes are settled and removed by a scraper. This water is known as clarified water. Air is pumped in this water to help aerobic bacteria to grow. The bacteria consume the wastes by microbial action. These microbes settle down after several hours and the water at the top is removed. This water is discharged into rivers and oceans or is put to other uses. 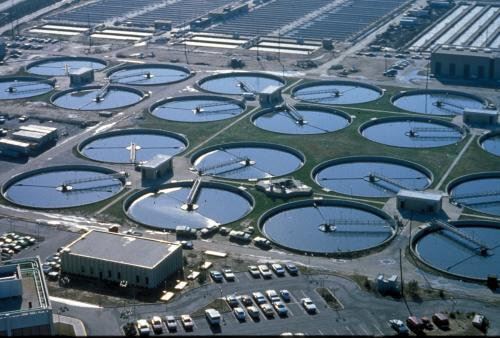 This article contains a brief description of sewage and its treatment. To learn more about this concept, install, BYJU’S – The Learning App.

Take up a quiz on sewage
Q5