Most students studying Chemistry would have heard the term oxides where a metal or element reacts with oxygen atoms to form Metal Oxides. Silver Oxide, Ag4O4, is an inorganic compound that is used in silver oxide-zinc alkaline batteries. The preparation of the oxide could be done by adding silver salts slowly into a solution of persulfate for instance AGNO3 to a solution of Na2S2O8.

Once done, it forms a structure that is unusual in nature as it is a compound that has mixed valences. The oxide would decompose once there is an O2 evolution happening in the water and forms a solid that has a dark brown appearance. Ag2+ ions with brown appearance are formed when this oxide is dissolved in concentrated nitric acid (HNO3).

AgO to be precise is diamagnetic despite the empirical formula showing that silver is in the oxidation state of +2 within the compound. There are two different types of coordination environments as per the studies on X-ray diffraction viz. one with two collinear oxide neighbors and the second with neighbours of four coplanar oxides. The formula for AgO would be Ag2O·Ag2O3 or AgIAgIIIO2. 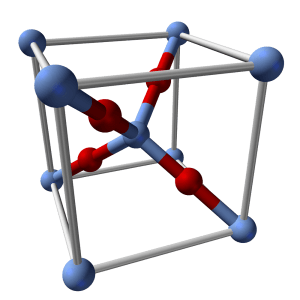 To prepare this oxide, silver powder of 65 grams along with sodium hydroxide of 150 grams in a 1.5-litre aqueous solution is suspended with continuous stirring. The density of the silver powder would be around 1.6 grams per cc (cubic centimetre). The grain size distribution would be around 33 per cent under 10 microns to 30 microns, 52 per cent under 10 microns, more than 30 microns will be 15%.

At 85 degree Celsius the liquid is heated and after reaching this temperature Potassium Peroxidisulfate (K2S2O8) is added in parts of 40 grams each adding up to 200 grams is mixed during intervals of 1 hour at least. At least for 3 hours, the stirring would continue once the final mix of the oxidant is added. Once the product is filtered, it is washed properly so that the alkali substances would be removed from it and it would be reduced into a particle form by drying it at a temperature of around 80 degree Celsius.

To learn more about Silver Oxide and different oxides of different elements, register with BYJU’S and download our app.

Take up a quiz on Silver oxide
Q5