We know that in an atom, electrons have discrete and specific energies. There are more energy states in an atom than there are electrons. When an electron transitions from one energy level to another, it emits light or photon with a specific wavelength. In any given set of conditions, the collection of all these specific wavelengths is what constitutes the atomic spectrum. Hence, atomic spectra are the spectra of atoms. Here, in this short piece of article, we will be looking at atomic spectra more in detail along with the Rydberg formula and the spectral series of the hydrogen atom.
Table of Contents:

What is Atomic Spectra?

Atomic spectra are defined as

The spectrum of the electromagnetic radiation emitted or absorbed by an electron during transitions between different energy levels within an atom.

When an electron gets excited from one energy level to another, it either emits or absorbs light of a specific wavelength. The collection of all these specific wavelengths of the atom in a given set of conditions like pressure, temperature, etc is the atomic spectra of atoms. There are three types of atomic spectra and they are emission spectra, absorption spectra, and continuous spectra.

You might want to check the difference between emission and absorption spectra for better understanding.

From the image above, it is evident that the atomic hydrogen emission spectrum is divided into a number of spectral lines with wavelengths given by the Rydberg formula. The observed spectral lines in the hydrogen emission spectrum are due to the atomic transitions between different energy levels. The spectral series are important in astronomical spectroscopy.
To know about the emission and absorption spectra in detail, see the video below. 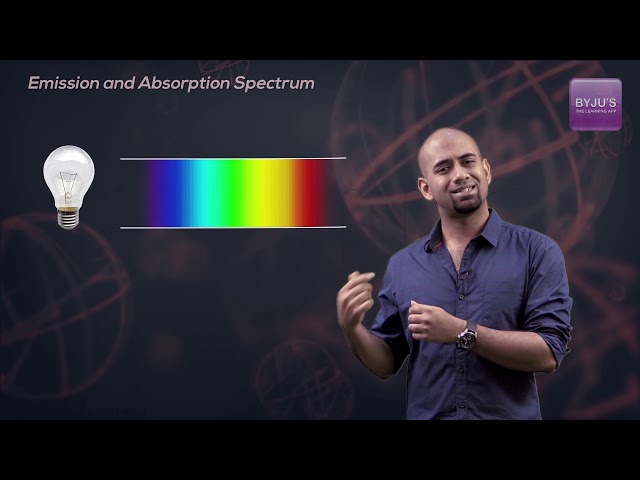 Using the Rydberg formula, it becomes easy to calculate the spectral lines. Following is the formula:

Z is the atomic number

n is the upper energy level

n’ is the lower energy level

λ is the wavelength of light

Spectral series of single-electron atoms like hydrogen have Z = 1.

Following is the table for λ in vacuum:

Following is the table for λ in the air:

What is atomic spectra?

Atomic spectra is the spectrum of the electromagnetic radiation emitted or absorbed by an electron during transitions between different energy levels within an atom.

What are the types of atomic spectra?

Types of atomic spectra are:

State true or false: Atomic Spectroscopy is used for identifying the spectral lines of materials used in metallurgy.

The study of the electromagnetic radiation absorbed or emitted by the atoms is known as?

What are the types of atomic spectroscopy?

Types of atomic spectroscopy are: