Coriolis Effect explains the pattern of deflection preferred by objects not firmly connected to the ground as they travel long distances around the Earth. The Coriolis Effect is responsible for many large-scale weather patterns. French engineer-mathematician Gustave-Gaspard Coriolis described the Coriolis effect in 1835.

What is the Coriolis Effect?

What is Coriolis Force?

Let us pretend to be standing at the North Pole and tossing a ball to our friend standing at the equator. While the ball travels through the air, the Earth below it is rotating. Hence, when the ball reaches the equator, it lands in a location somewhere to the west of where you were aiming. The figure below illustrates this example.

Near the earth’s surface, the Coriolis effect creates wind (and water) patterns that move to the east toward the equator and to the west toward the poles. These prevailing wind patterns are responsible for moving clouds around the globe and, thus, for creating patterns of weather in different regions.

A ball’s movement across a rotating merry-go-round shown in the video is a helpful demonstration of the Coriolis force. 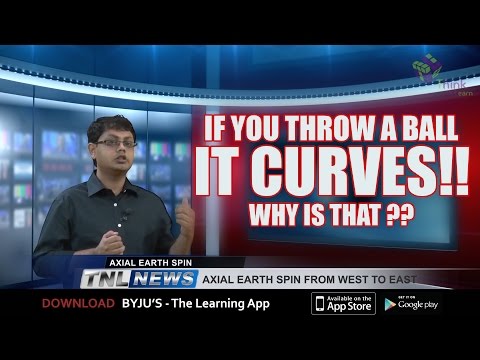 The Coriolis effect characteristics can be summarised as follows:

How are weather patterns affected by the Coriolis Effect?

The development of weather patterns, such as cyclones and trade winds, are examples of the impact of the Coriolis Effect.

In the Northern Hemisphere, fluids from high-pressure systems pass low-pressure systems to their right. As air masses are pulled into cyclones from all directions, they are deflected, and the storm system, a hurricane, seems to rotate counter-clockwise.

In the Southern Hemisphere, currents are deflected to the left. As a result, storm systems seem to rotate clockwise.

Impact of Coriolis Effect on Airplanes and Human Activity

Fast-moving objects impacted by weather, such as aeroplanes and rockets, are influenced by the Coriolis Effect. The Coriolis Effect largely determines the direction of the prevailing winds. Hence a pilot must take this into account while charting routes for long-distance travel.

Military snipers consider the Coriolis effect. Although the trajectory of bullets is minimum to be greatly affected by the Earth’s rotation, sniper targeting is so precise that a deflection of several centimeters could injure innocent people or damage civilian infrastructure.

In simple terms, the Coriolis Effect makes things travelling long distances around the Earth appear to move at a curve as opposed to a straight line.

How does the Coriolis effect affect the wind?

Where is the Coriolis effect the strongest?

The Coriolis effect is strongest near the poles and is absent at the equator.

Why does the Coriolis effect not occur at the equator?

Underneath a horizontally and freely moving object at the equator, there is no turning of the surface of the Earth. As a result, there is no curving of the object’s path relative to the Earth’s surface.