Eye related or ophthalmological problems are most common these days due to the strain on the eye. Hypermetropia is one of the common eye problems that affect people of all age groups. Many infants and small children tend to have far-sightedness, but it gets normal once the babies are three years old.

Let us learn more about hypermetropia, its causes and the ways it can be corrected.

The picture below helps you to understand the cause for hypermetropia in a better way.

The person suffering from hypermetropia will have difficulty in focusing on nearby objects, but can clearly see distant objects. Accommodation is the process used to treat hypermetropia without any defects in vision in the early stages.

This problem shows no major symptoms initially but later leads to a mild aversion to light, blurry vision, watering, tiredness in eyes, inward turning of the eyes and causes headaches too.

Clinically far-sightedness is classified based on the structural appearance of the eyes, severity, or how eyes respond to the accommodative status:

Based on the structure of the eye, hyperopia is classified into:

Based on severity hypermetropia is classified into:

Based on the accommodative status hypermetropia is classified into:

Comparison of image focus by a normal eye and eye with hypermetropia condition is as shown in the figure below. 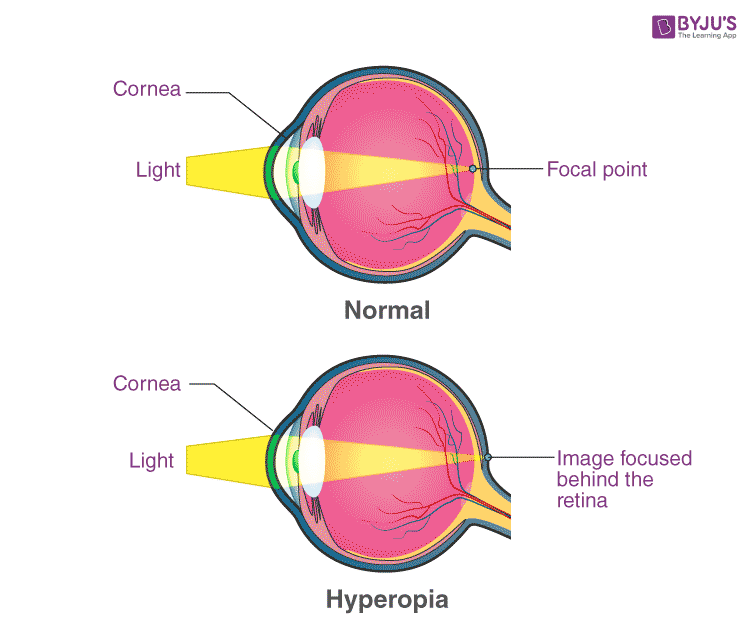 It is the condition of the eyes where the image of a nearby object is formed behind the retina.

Accommodation is the process used to treat hypermetropia without any defects in vision in the early stages.

3. Based on the structure of the eye, how is hypermetropia classified?

4. What are the symptoms of hypermetropia?

Blurry vision, watering, tiredness in eyes, inward turning of the eyes and headaches.

5. Based on accommodative status, how is hypermetropia classified?

Stay tuned with BYJU’S to know more about various interesting topics. Also, register to “BYJU’S – The Learning App” for loads of interactive, engaging Physics-related videos and an unlimited academic assist.