We see rocks in our surrounding, from different shapes to size. Rocks never remain same and they are always changing with time. Rock cycle is a basic concept in geology that describes the time-consuming transitions through geologic time.

Rocks are constantly being recycled and go through several processes of chemical and physical changes. There are three main rock types:

The diagram below shows that rocks are altered or destroyed when it is forced out of its equilibrium conditions. These cycle of rock formation and wearing out is constantly recycled the earth’s minerals. The rock cycle is nothing but a process by which rocks of one type with certain characteristics changes into the rocks of another kind. When rocks are pushed deep under the earth’s surface, they may melt into magma. If the conditions no longer exist for the magma to stay in its liquid state, it will solidify into an igneous rock.

The rock exposed to high temperatures and pressures can be changed physically or chemically to form a different rock, called metamorphic.

For More Information On Formation Of Metamorphic Rocks, Watch The Below Video: 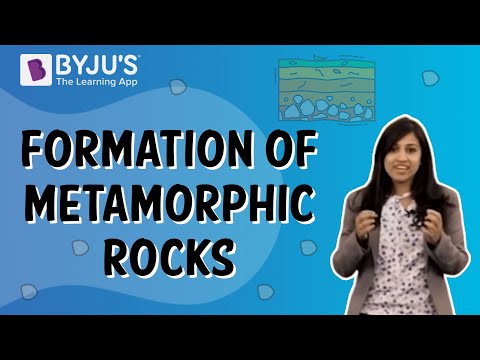 Rocks exposed to the atmosphere are variable unstable and subject to the processes of weathering and erosion. This process breaks the original rock down into smaller fragments and carries away dissolved materials.

What is a rock?

A rock is any piece of naturally existing solid mass or aggregate of one or more minerals.

What are the main three types of rocks?

Sedimentary, metamorphic, and igneous rocks are the main three types of rocks.

What is a rock cycle?

A rock cycle is a fundamental concept that shows the transitions among the three basic rock types (metamorphic, igneous and sedimentary). In simple terms, it is a chain of processes that produce and transform the rock types in Earth’s crust.

Explain the creation of igneous rock.

When rocks are heavily pushed deep into the surface of the Earth, they may melt into hot magma. If the circumstances no longer exist for molten magma to remain in its fluid state, it will surely harden into an igneous rock.

How metamorphic rocks are formed?

The rocks that are exposed to high pressure and temperature can be changed chemically or physically to form exotic rocks known as metamorphic rocks.
Test your Knowledge on Rock Cycle
Q5