“An acetal is an organic molecule where two separate oxygen atoms are single bonded to a central carbon atom.”

Two distinct oxygen atoms are singly linked to a central carbon atom in an acetal, which is an organic molecule. R2C(OR’)2 is the general structure of acetals. An acetal can comprise derivatives of ketones when neither R group is a hydrogen, according to an older definition of acetal, which required at least one R group to be a derivative of an aldehyde where R = H. A ketal is a specific sort of acetal. Mixed acetals are acetals that contain distinct R’ groups.

The functional groupings acetal and hemiacetal have been identified. Hemiacetal is a byproduct of the acetal production process. Acetalisation is the process of forming acetal. The reaction between an aldehyde and an alcohol is used to create acetal in this case. Hemiacetal can also be made by partially hydrolyzing acetal. Hemiacetal is less stable than acetal.

Hemiacetals and acetals are formed when two alcohol molecules combine. Unless a cyclic hemiacetal is generated, only the acetal is thermodynamically more stable than the carbonyl species. By adding H2O, these processes can be reversed, returning to the carbonyl compound and alcohols.

Both groupings have carbon atoms that have been sp3 hybridised in the middle. The primary distinction between acetals and hemiacetals is that acetals have two –OR groups, whereas hemiacetals have one –OR and one –OH group.

Acetal is a functional group with four bonds on the core carbon atom: -OR1, -OR2, -R3, and H. (where R1, R2 and R3 groups are organic fragments). The two –OR groups could be the same (symmetric acetals) or distinct (asymmetric acetals) (mixed acetals).

Water rapidly adds to the carbonyl function of aldehydes and ketones to create geminal-diol, as has been established. Alcohols reversibly combine with aldehydes and ketones to generate hemiacetals in a similar process (hemi, Greek, half). Adding another alcohol to this reaction will result in the formation of an acetal. Because they are present in sugars, hemiacetals and acetals are essential functional groups.

Acetals are geminal-diether aldehyde or ketone derivatives formed by reacting two equivalents (or an excess amount) of an alcohol with the removal of water. Ketone derivatives of this type were once known as ketals, but that term is no longer used. It’s worth noting that a hemiacetal forms as an intermediate during the acetal production process. 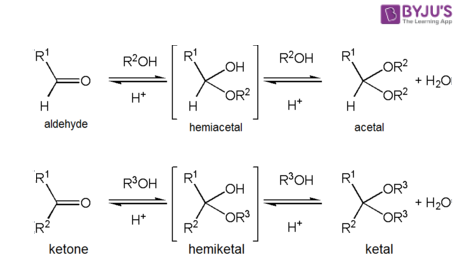 Acetal is a synthetic polymer that can be homopolymerized or copolymerized. Large molecules built up of repeated subunits are known as synthetic polymers (monomers). Repeating monomers of a single molecular substructure form homopolymers, whereas several different monomer types in combination with one another form copolymers. Homopolymers are made up of repeating monomers of a single molecular substructure, whereas copolymers are made up of several different monomer types combined.

While acetal is hazardous when breathed or absorbed through the skin or eyes as a vapour or liquid, it is not a health danger while in solid form. In fact, it’s commonly found in food processing and manufacturing equipment. Naturally, you’ll want to double-check your specifications with the material’s manufacturer and take into account the environment in which it will be used.

What is the difference between hemiacetal and acetal?

Hemiacetal is a byproduct of the acetal production process. Acetalization is the process of forming acetal. The primary distinction between acetals and hemiacetals is that acetals have two –OR groups, whereas hemiacetals have one –OR and one –OH group.

Why are acetals more stable than hemiacetals?

Cyclic acetals are more stable than regular acetals because of the chelate effect, which derives from having both -OH groups of the acetal connected to each other in the diol. Cyclic hemiacetals that form five- or six-membered rings are stable (as opposed to non-cyclic hemiacetals which are not stable species).

What is an acetal functional group?

A functional group in which carbon is attached by single bonds to two ether oxygen and two carbons (or hydrogens). A thioacetal has two sulfur atoms in place of an acetal’s two oxygen atoms.

What is the hemiacetal form?

What is cyclic acetal?

A cyclic acetal is an acetal in the molecule of which the acetal carbon and one or both oxygen atoms thereon are members of a ring.