Alcohols are the compounds of the general formula R – OH, where R is an alkyl or a substituted alkyl group. Thus, alcohols are the derivatives of alkanes in which one or more H atoms are replaced by -OH. 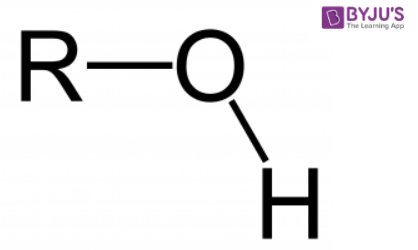 Alcohols are very important industrial chemicals. Ethanol is widely used as an antiseptic in the form of a rectified spirit. It is the main component of all alcoholic beverages, and is used as a solvent for lacquers and varnishes.

Alcohol can be prepared by general methods as well as by industrial processes.

By Fermentation of Carbohydrates

Slow decomposition of large organic molecules (carbohydrates, sugar and starch) in the presence of suitable enzymes produces alcohol. This method can be used to prepare ethanol by fermenting glucose.

The physical and chemical properties of alcohols are primarily due to the presence of a hydroxyl group.

Alcohols can be classified on the following basis:

i. On the basis of the number of -OH groups present in the molecule.

ii. On the basis of the nature of the carbon atom bonded to the -OH group.

Classification of Alcohols on the basis of -OH groups

Alcohols are classified into three types- Primary, Secondary, and Tertiary based on the number of carbon atoms directly attached to the carbon bonded with the -OH group.

Alcohols are organic molecules with a functional hydroxyl or –OH group bonded directly to carbon. Alcohol gets its name from the hydrocarbon from which it is derived.

There are three systems of naming alcohols-

For alcohols containing three or more carbon atoms, there can be more than one location of the -OH group. Such alcohols are named primary, secondary or tertiary alcohols. They are often named using the prefixes as n or iso-. In this system, the name of alcohol is obtained by replacing the last ‘e’ in the name of the parent alkane, akene or alkyne by the suffix ‘ol’. However, the higher and branched-chain compounds follow certain procedures. 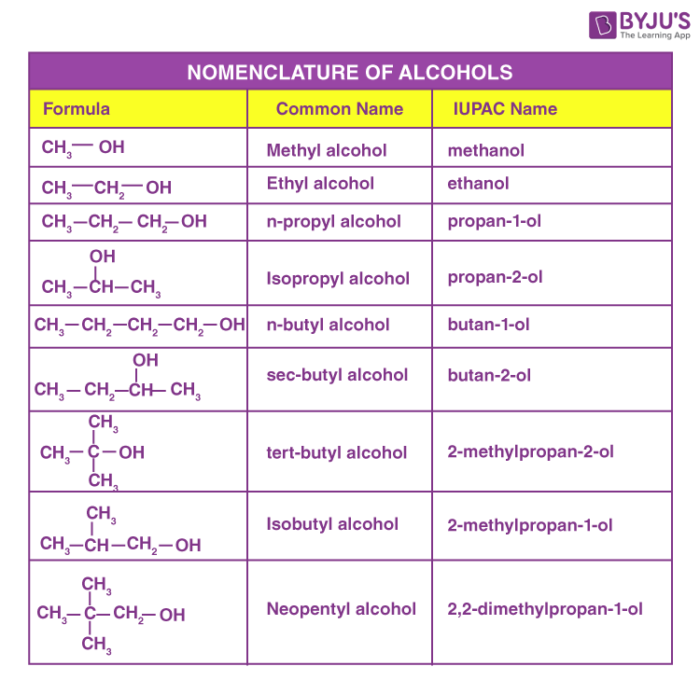 Some of the commonly used alcohols are methanol, ethanol, propanol and butanol.

What is the effect of alcohol on litmus?

Alcohols are neutral substances and have no effect on litmus.

How can alcohol be detected?

Test reagents that react with the -OH group can be used to detect the presence of alcohol. The first step in identifying alcohols is to take a neutral liquid devoid of water and add solid phosphorus(V) chloride. The presence of alcohol is indicated by a burst of acidic steamy hydrogen chloride fumes. Following tests are required to differentiate between alcohol classifications.

Give the classification of alcohols based on the number of -OH groups present in the molecule of alcohol.

Alcohols can be classified as monohydric, dihydric, trihydric and polyhydric based on the number of -OH groups present in the molecule of alcohol.

Which alcohol is the most soluble in water.

Methanol is most soluble as it has the smallest chain among all the other compounds of alcohol.

Which alcohol is named glycols?

The dihydric alcohols are named glycols.