Aspirin is the prototype analgesic , antipyretic and anti – inflammatory drug . It is indicated for dysmenorrhoea , headache , pyrexia and transient musculoskeletal pain.

Aspirin may contribute to the formation of stomach ulcers and bleeding. People who are allergic to aspirin and those with a history of nasal polyps, asthma or rhinitis may experience breathing difficulty and a stuffy nose. Aspirin is widely used for secondary prevention in patients with established coronary, cerebrovascular, or peripheral arterial disease.

Aspirin is the oldest and still the most widely used antiplatelet agent. Aspirin exerts its antithrombotic effect by irreversibly inhibiting platelet cyclooxygenase through acetylation of serine at position 529 leading to steric hindrance of substrates for the enzymes.

Aspirin is the prototype analgesic, antipyretic and anti-inflammatory drug. It is indicated for dysmenorrhoea, headache, pyrexia and transient musculoskeletal pain. Aspirin is usually given by mouth and is rapidly absorbed from both the stomach and the ileum.

Aspirin has a range of benefits, from relieving discomfort to minimising the risk of serious conditions such as cardiac attacks and strokes. Aspirin is a common drug. It appears in many types, such as capsules, water-dissolved tablets, powders, and oral gels.

Aspirin (acetylsalicylic acid) is used in the treatment of cardiovascular disease and as an analgesic / anti-inflammatory drug. About four decades earlier, the discovery that thrombocytopenia-inducing agents decreased metastases led to the study of aspirin as an anticancer treatment, with fibrosarcoma metastasis greatly diminished by aspirin in animal models.

The structure of aspirin is given below. 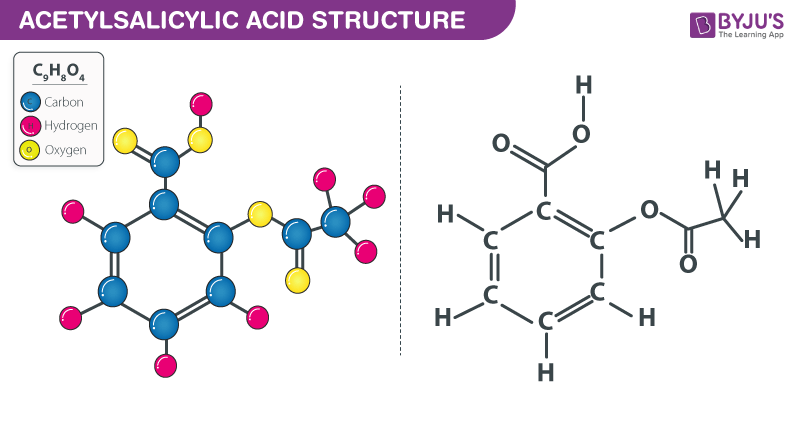 Aspirin (acetylsalicylic acid) is a medical medication that is used to alleviate irritation or inflammation. It is a non-steroidal anti-inflammatory drug.

It is also used for blood clots, heart attacks, strokes, and bowel cancer prevention. However, while some studies have shown that aspirin can decrease the probability of heart attacks and cancer of the intestines, stomach, and oesophagus, clinicians are also urged to exert caution when using aspirin as a preventive measure, as it can increase the risk of gastrointestinal bleeding and harm.

Before taking aspirin, persons with renal failure, liver damage or haemophilia should see a specialist. Some people use aspirin to get high, or by deliberately taking more than the prescribed dosage as an act of self-harm. 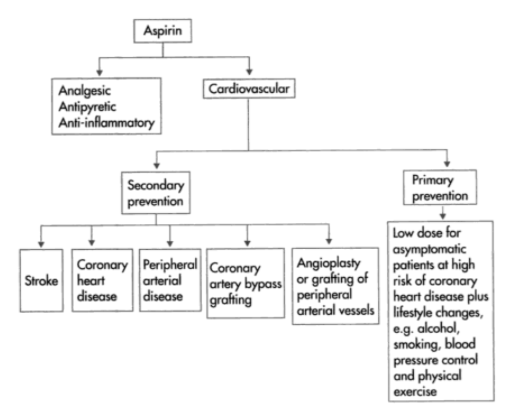 Aspirin will increase the likelihood that the liver, small intestine, and brain will bleed. There is normally a membrane that protects the lining of your intestine and gut from the acid in your stomach. It will eventually affect this layer if aspirin is used at high doses and for a long time. This injury will contribute to bleeding. The normal repair of broken blood vessels and increasing the risk of bleeding in the brain will also be impaired by the use of aspirin to avoid blood clots.

Aspirin may theoretically interfere with other drugs that can change their effects or raise the risk of side effects, including certain alternative and herbal medicines. 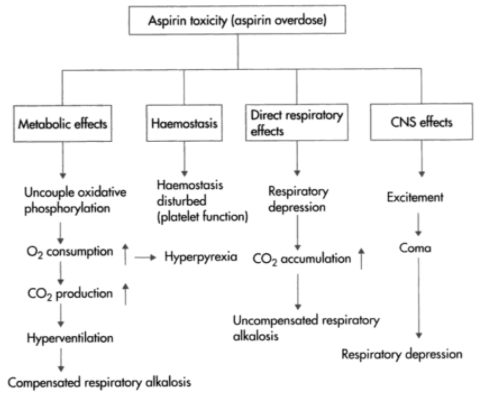 What is aspirin and what is it used for?

Aspirin is a frequent painkiller, such as headache, toothache and menstrual pain, for aches and pains. It can also be used to combat colds and conditions that are “flu-like” and to minimise hot temperatures. It is sometimes referred to as acid acetylsalicylic.

Is aspirin used as a blood thinner?

It can benefit by messing with how the blood clots avoid a heart attack or clot-related stroke. Yet unintended side effects, including bleeding in the brain or stomach, can also be caused by the same properties that make aspirin act as a blood thinner to protect it from clotting.

What is aspirin used for in an emergency?

Aspirin is one of the safest medicines used for heart disease emergency treatment: aspirin is an antiplatelet agent; it interferes with the coagulation process and can be successfully used after a possible heart attack in an emergency with other blood thinners.

What pain is aspirin good for?

Aspirin is a frequent painkiller, such as headache, toothache and menstrual pain, for aches and pains. It can also be used to combat colds and conditions that are “flu-like” and to minimise hot temperatures. It is sometimes referred to as acid acetylsalicylic.

What is aspirin used for and side effects?

Aspirin is used in conditions such as muscle aches, toothaches, chronic colds, and headaches to minimise discomfort and alleviate mild to moderate pain. In disorders like arthritis, it can also be used to decrease discomfort and swelling. Aspirin is classified as a nonsteroidal anti-inflammatory drug and salicylate.