The biuret test, commonly known as Piotrowski’s test, is a chemical procedure for detecting peptide bonds. In an alkaline solution, a copper(II) ion produces mauve-coloured coordination complexes in the presence of peptides. The BCA test and the Modified Lowry test are two versions of the test that have been developed.

Because the bonds in biuret molecules ([H2N-CO]2NH) are similar to peptide bonds, a positive result for this test is also received when the analyte contains them. Proteins bind copper at higher pH, generating the biuret complex in particular. Proteins mobilise copper ions in a pH-dependent manner.

Biuret is a chemical made by heating urea to 180 degrees Celsius. The Biuret reagents, which include a 1 percent solution of Copper II sulphate (CuSO4), are used in a chemical test known as the Biuret test. The Cu2+ in the Biuret reagent binds to the peptide bonds in proteins, forming a complex. As a result, this test aids in the identification of peptide bonds in any substance.

Below is an illustration of a positive biuret test with the unique pale purple colour that indicates it.

It should be noted that there have been various variations of the biuret test established. The modified Lowry test and the BCA test are two examples of such variants. It’s also worth noting that the intensity of the purple colour, and hence the absorption at 540 nanometers, is proportional to the protein concentration in the analyte (as a consequence of the Beer-Lambert law). Because the bonds in biuret molecules ([H2N-CO]2NH) are similar to peptide bonds, a positive result for this test is also received when the analyte contains them.

This test’s technique is based on a number of ideas. The following are some of them: 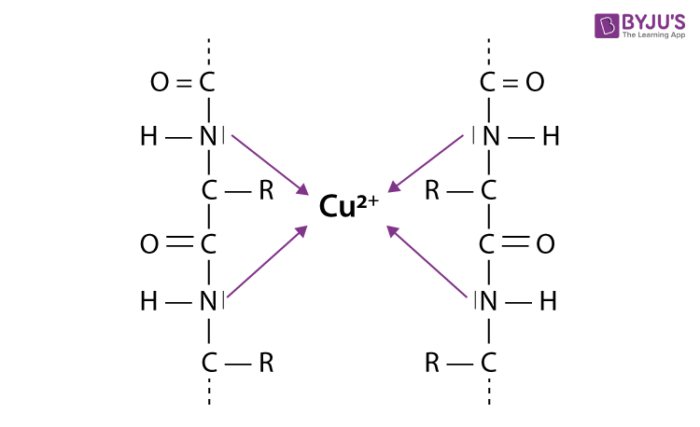 Copper sulphate (CuSO4), sodium hydroxide (NaOH), and sodium-potassium tartrate are used to make the biuret reagent (also known as Rochelle salt). Biuret ((H2N-CO-)2NH) is not present in this reagent, despite its name. The Biuret protein assay relies on it.

The procedure of Biuret Test

We may easily conduct this test by following the instructions below.

Biuret Reaction at the Physiological pH

The biuret method, which uses the interaction of peptide bonds in proteins with cupric ions at alkaline pH to generate a coloured product that absorbs at 540–560 nm, is often used to assess total protein in plasma or serum.

The Lowry method is 1 to 2 orders of magnitude more sensitive (5 to 150 g) than the biuret method, which is sensitive in the range of 0.5 to 2.5 mg protein per experiment.

The biuret method, which uses the interaction of peptide bonds in proteins with cupric ions at alkaline pH to generate a coloured product that absorbs at 540–560 nm, is often used to assess total protein in plasma or serum. As a result, this approach relies on a constant ratio of peptide bonds to protein mass, which isn’t true for all proteins in blood but is precise enough for clinical usage.

The importance of the biuret test stems from the fact that it can identify the amount of protein in the urine. Protein overabundance can cause renal damage as well as other health problems such as diabetes and high blood pressure.

Why do we need the Biuret test?

The biuret test is a chemical procedure for determining whether or not a substance has peptide bonds. As a result, the biuret test can be used to determine the amount of protein in analyte.

What is the purpose of the biuret reagent’s high pH?

Why is biuret purple in colour?

Biuret reagent is normally blue in colour. When peptide bonds — the chemical bonds that hold amino acids together — are present, the reagent turns violet.

What is the role of albumin in the Biuret test?

Positive control for the protein test is egg albumin + Biuret’s reagent. It demonstrates that the test result was positive (protein is present).

What is the substance that reacts with biuret?

The biuret method works on the principle that proteins (and, by extension, all molecules containing two or more peptide linkages) react with copper to generate a colourful complex whose absorption (λmax= 454 nm) is proportional to the amount of protein present in the presence of excess copper.